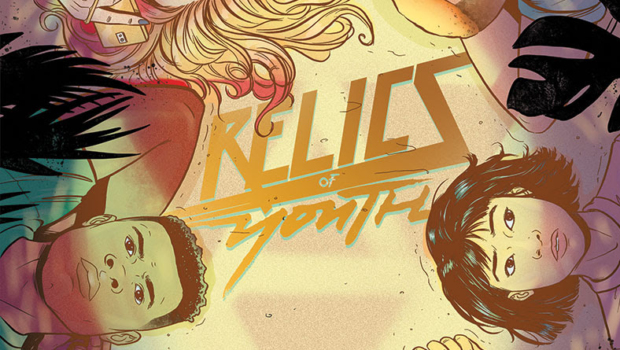 Vault Comics delves into the secrets that lie in the heart of the Bermuda Triangle in the new comic book series, RELICS OF YOUTH. Landing on shelves in September, the fantasy series is co-written by Chad Rebmann (The Odyssey, Judo Girl) and screenwriter Matt Nicholas, with artist Skylar Partridge (Crowded) and letterer Deron Bennett (Batman).

Nat Rodrigues keeps dreaming of an island. Soon, the dreams become waking visions. Alone and concerned, Nat manages to locate other teenagers across the globe who share her intense obsession with the unmapped enclave. And then, the strangest part: Every one of them wakes one morning with a mysterious tattoo. A tattoo only the six of them can see. Now, each of them knows – no matter the obstacles in their way – they must discover this unknown paradise.

“Relics of Youth manages to catch lighting in a bottle, balancing compelling drama with glowing moments of exuberance, in the spirit of Runaways or Morning Glories,” said Vault Editor-in-Chief Adrian Wassel. “You’re instantly pulled into a world of young, lovely, and broken-but-healing characters you can’t help but root for, as they uncover an ancient mystery and some pretty dazzling powers, too.”

“It’s been a personal highlight to work with the Relics team and watch this story come to life,” says co-editor David M. Booher (Alien Bounty Hunter, Canto). “I’m a huge fan of young adult adventure—everything from Hunger Games to Tomb Raider—and the moment Adrian told me about the series, I jumped at the chance to be even a small part of it. Matt and Chad’s scripts create a perfect blend of thrills, snarky fun, and relationship drama. When I saw Skylar’s art, I was stunned. Relics is the next great series from Vault, and I can’t wait for readers to come along for the ride.”

“As a comic fan-turned creator, it has been a rewarding experience developing this comic with the likes of Vault Comics – who I have been a fan of since their inception,” said Matt Nicholas. “Chad, Skylar and I couldn’t have found a better team to help us shape this property into a series we know everyone will love as much as we do.”

“It’s been such an amazing experience to be working with Adrian, David and the entire Vault crew this past year,” added Chad Rebmann. “Relics of Youth has been a passion project for both me and Matt and watching Skylar Patridge bring this magical world to life with her stunning art has been a real treat.”

In addition to writing comics, Rebmann has also penned The Power of the Valkyrie and The Worlds of Dungeons & Dragons. Nicholas is currently writing and producing several features which are in development with the production companies owned by Academy Award Winner Viola Davis, Academy Award Winner Mo’Nique, and Gabrielle Union.

The series will launch with a Cover A drawn by Skylar Partridge, and a Vault Vintage Cover B drawn by Nathan Gooden and Tim Daniel. The Vault Vintage cover is an homage to Wes Craig’s cover for Deadly Class #1, the series he co-created with Rick Remender.