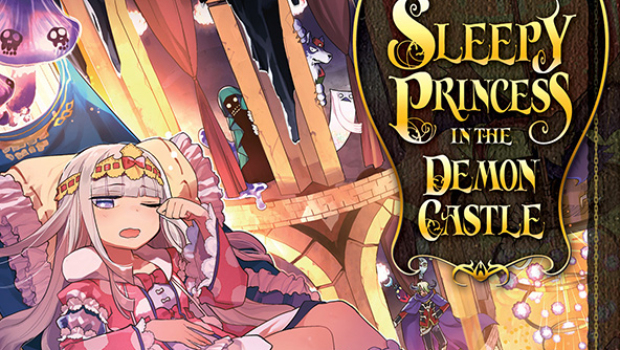 VIZ Media announces the debut of the new fantasy adventure series Sleepy Princess in the Demon Castle on June 12th.

Sleepy Princess in the Demon Castle features story and artwork by Kagiji Kumanomata. The series will be published under the Shonen Sunday imprint with a rating of ‘T’ for Teens. Print MSRP for Volume 1 will be $9.99 U.S. / $12.99 CAN. Volume 1 is also available digitally on June 12th via viz.com and the VIZ Manga App, as well as from the Nook, Kobo, Kindle, iBooks, comiXology, and Google Play stores. Future volumes will be published in English by VIZ Media on a quarterly basis.

Kidnapped by the Demon King and imprisoned in his castle, Princess Syalis is…bored. She decides to while away the hours by sleeping, but getting a good night’s rest turns out to be a lot of work! She begins by fashioning a DIY pillow out of the fur of her Teddy Demon guards and an “air mattress” from the magical Shield of the Wind. The princess’s hapless demonic guards soon discover that their captive expects to be treated like, well, a princess. Things go from bad to worse—for her captors—when some of Princess Syalis’s schemes end in her untimely—if temporary—demise and she chooses the Forbidden Grimoire for her bedtime reading…

“Sleepy Princess in the Demon Castle delivers a smile-inducing mix of fantasy, adventure and comedy,” says Annette Roman, Editor. “The Demon King and his minions are in for a lot more than they bargained for when they kidnap the resourceful but sleep-deprived Princess Syalis. We invite readers to enjoy this series debut this summer!”

For additional information on the Sleepy Princess in the Demon Castle and other manga titles published by VIZ Media, please visit viz.com.

Established in 1986, VIZ Media is the premier company in the fields of publishing, animation distribution, and global entertainment licensing. Along with its popular digital magazine WEEKLY SHONEN JUMP and blockbuster properties like NARUTO, DRAGON BALL, SAILOR MOON, and POKÉMON, VIZ Media offers an extensive library of titles and original content in a wide variety of book and video formats, as well as through official licensed merchandise. Owned by three of Japan’s largest publishing and entertainment companies, Shueisha Inc., Shogakukan Inc., and Shogakukan-Shueisha Productions, Co., Ltd., VIZ Media is dedicated to bringing the best titles for English-speaking audiences worldwide.

Learn more about VIZ Media and its properties at viz.com.