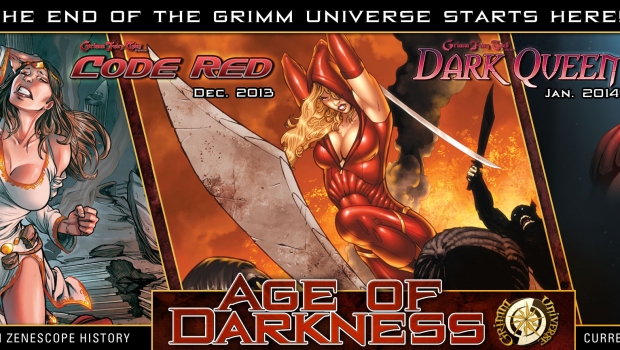 Zenescope Entertainment has announced plans for a new event that will become part of the long running hit comic book series, Grimm Fairy Tales. The event is called Age of Darkness and will involve most of Zenescope’s Grimm Universe spinoff series as well as its flagship title, Grimm Fairy Tales as it approaches its landmark 100th issue, due out July 2014.

“Everything we’ve ever done in the Grimm Fairy Tales has led up to this event and the Grimm Universe will be forever changed by this.” states Zenescope President, Joe Brusha. “We’re thrilled that this series has lasted so long and we’re even more excited to see it evolve into something bigger now with the Age of Darkness event.”

Age of Darkness will first hit the Grimm Universe starting in two spinoff titles: Quest and Code Red. But 2014 will get more intense as the Age of Darkness descends upon multiple Grimm Fairy Tales series including Robyn Hood, Neverland, Inferno and Wonderland: Clash of Queens.

“We’re definitely going to shock some fans as we lead up to #100.” says Editor-in-Chief Ralph Tedesco “But Age of Darkness is not being done simply for shock value, we want this ride that our fans have taken with us for the past eight years to really pay off.”

Upcoming Age of Darkenss titles are currently available for pre-order in Diamond Previews, which is out now. Check back on the Zenescope blog, http://blog.zenescope.com/ and follow Zenescope on Facebook at www.facebook.com/zenescope and on Twitter @Zenescope for updates.