Zenescope Entertainment has announced plans for a line of digital-first releases that will become available in April of 2013. These digital releases will expand beyond the horror and fantasy fare the company is best known for and will include a mix of genres such as comedy, sci-fi, action and all-ages. Zenescope will also offer continuations of previous published titles that will return in a digital first format.

Said Zenescope Editor-in-Chief Ralph Tedesco, “We’ve spent several years growing the Zenescope brand but digital publishing gives us more flexibility and allows us to step outside of the horror and fantasy genres and bring some other titles we’re passionate about into the mix. And we can offer these books at a lower cost to readers.”

Zenescope is planning to offer most #1 issues of its digital first titles free of charge for one week upon release and for between $0.99 to $1.99 thereafter. Here’s a list if the planned digital first releases for 2013:

Family Pets (All Ages) – After turning sixteen, Thomasina begins to accept that her life will remain unremarkable… But when she wakes up one morning to discover that her foster family has been turned into pet animals, her ordinary life will turn into an extraordinary adventure! The series is written by Pat Shand and artwork by Sara Dill. (April release)

Monster Hunters’ Survival Guide (Action/Horror) – Set in a modern world where monsters of all types very much exist. This series centers on monster hunter, John Paul Russ as he attempts to thwart dangerous and terrifying monsters and beings of all kinds. (Summer release)

SciFi & Fantasy (Mature Fantasy/Horror) – In the same vein as classic horror series “Tales From the Darkside” and “Twilight Zone,” Zenescope offers fascinating horror and sci-fi series one-shots giving readers a frightening view of the not so distant future. (Summer release)

Suckers (Comedy) – A mature comedy about two vampires who decide to go on a killing spree after being fed up with how vamps are depicted in films and TV. Written by Pat Shand and artwork by Ian McGinty. (Fall release) 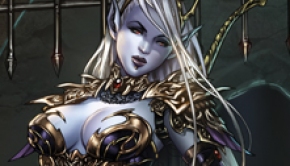 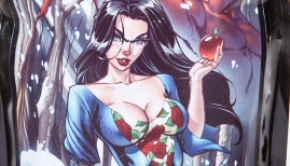 A Match Made in Horror: The New Grimm Fairy Tales…Coffee?! →