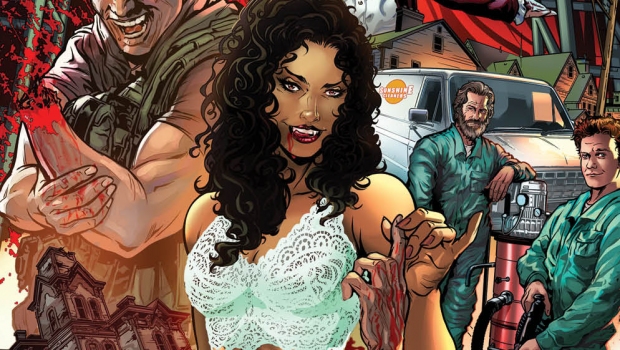 Zenescope expands its new Monster Hunter Universe with All Guts, No Glory

Zenescope Entertainment is perhaps best known for reimagining and updating fairy tales and public domain IP for its vast line of comic books and graphic novels. Over the last 16 years, the company has quietly and methodically built the largest female-based shared universe in comic books. But perhaps not as well-known is Zenescope’s continually growing horror, sci-fi and comedy titles.

In 2011, Zenescope published The Monster Hunters’ Survival Guide, a darkly comedic illustrated novel about how to hunt, capture or kill every type of monster in the world. Written with a tongue-in-cheek style by self-proclaimed monster hunter, JP Russ, the book opened up the potential for Zenescope to create yet another shared universe. Zenescope later published The Monster Hunter Survival Guide comic book series that tied directly to the illustrated novel. Then, in 2021, the comedy-horror series, Man Goat & The Bunny Man, became a smash-hit for the company after selling out of multiple issues through the company’s distributor, Diamond Comics Distribution.

Now comes All Guts, No Glory, the newest action-comedy-horror series, which further expands Zenescope’s monster hunting universe. The series follows a high school senior named Jimmy Shepherd, who gets a job as a bio-hazard cleaner specializing in the disposing of waste that monster hunting teams leave behind after battling creatures that pose a threat to humanity.

“It’s a coming of age story wrapped up in a supernatural action comedy,” says writer/co-creator Ralph Tedesco. “It takes place in the same universe as our other monster hunter titles, which is something we’ve made a concerted effort to expand over the last few years. This blending of different genres is something that we gravitate to as creators; so it just made sense to use that as a basis to create our next shared universe of titles.”

Based on sales, Zenescope appears to have hit a nerve with its newest universe as the company continues to expand its reach to more comic readers.  All Guts, No Glory is a three-part series of 36-page issues priced at $5.99 each.

Issue #1 hits local comic shop shelves this week, and can also be ordered online at Zenescope.com.