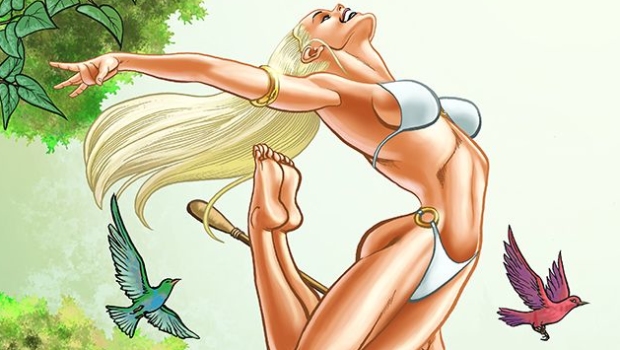 In the deepest reach of Africa, the heroic Jungle Queen Sheva fights a never ending battle to protect her magic valley from all threats

JUNGLE QUEEN SHEVA will be the first part of a trilogy of Sheva Oneshots as well as the first step into publishing the ZEU LIBRARY, where creator Eliseu “ZEU” Gouveia (Stargate, Cloudburst) will have the chance to finally channel his (finished and upcoming) personal projects onto paper.

In this first SHEVA adventure, she will face a legion of legendary amazons who enter the valley searching for the Heart of Apollo, a terrifying weapon believed to have been lost during the fall of Atlantis. As the army  advances, conflict ensues threatening the delicate balance of forces in  the region and it’s up to Sheva to defuse the situation.

SHEVA is also all about introducing the ZEU LIBRARY, with future titles like “Lady of the Horde“, “Silversparrow“, “Medusa“, “Harlekin Waltz“, “Infiniteens” and many more.

With support of the Kickstarter-community, as well as via the Direct Market in months to come, the ZEU LIBRARY will be able to showcase genres like horror, action/aventure, superhero, coming of age and more, all done with that special ZEU-twist.

All the afore-mentioned projects are fully finished projects, written & penciled & colored by creator/artist Eliseu Gouveia, a Portuguese guy born in Mozambique who has been drawing for far longer than he’d care to admit.

Over the years Zeu has worked on many comic projects and series, from Cloudburst by Jimmy Palmiotti and Justin Gray for Image Comics to Vengeance of the Mummy and The Phantom for Moonstone Books, on Lorelei and Pandora Zwieback for Starwarp Concepts and as a sketch card artist for Marvel Rittenhouse Archives.

Presently Zeu provides artwork for several webcomic titles such as Granted and Bastard Kingdom, as well as doing the art for comic book franchise Stargate Atlantis and Stargate Universe for American Mythology comics.