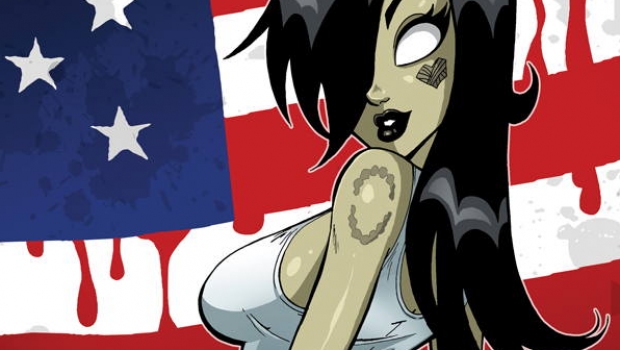 She’s sexy, she’s powerful and she’ll steal your heart..literally. Dan Mendoza’s critically acclaimed horror series, Zombie Tramp, the story of a former call girl turned mystically empowered member of the undead returns to stores in July. Sporting a slew of variant covers from industry heavyweights like Jerry Gaylord and Josh Howard, Janey Bell makes her way to the Sin City as she tries to reclaim her former life.

Once one of Hollywood’s most beautiful call girls, Janey was bitten, killed and then resurrected as a Zombie. Picking up from this years Free Comic book Day Preview, she’s made her way to the Miracle in the Desert to start over. But what secrets are buried beneath the City of Entertainment. Danger abounds, nothing is what is seems and whatever happens in Vegas, stays in Vegas..forever.
Series Creator Dan Mendoza returns to tell another tale of kinky supernatural action, now joined by co-writer Jason Martin (Super Real, Night of the 80’s Undead) and new series artist TMChu.

Are you bold enough to take a ride with Janey, the Zombie Tramp?!?