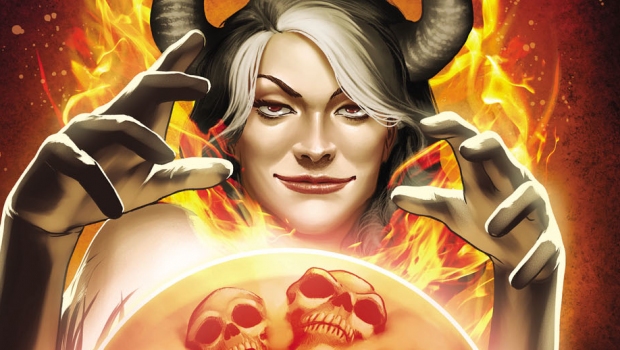 Archie Comics will continue their chilling reign in horror stories under the leadership of Senior Director of Editorial, Jamie L. Rotante. As a highlight to her newly expanded role, Rotante will oversee the release of the all-new anthology CHILLING ADVENTURES IN SORCERY #1 on November 3.

Rotante has worked at Archie Comics for over a decade in both editorial and creator positions. Author of BETTY & VERONICA: VIXENS and SENIOR YEAR storylines, Rotante helped provide a unique take on the legendary characters, in addition to penning Archie’s first original graphic novel, THE BOND OF FRIENDSHIP with artist Brittney Williams. Her new role places her in charge of the editorial direction for new comics and graphic novel content, working with licensors, and more.

In one of the first releases under Rotante’s leadership, CHILLING ADVENTURES IN SORCERY #1 is an expansion of last year’s thrilling MADAM SATAN one-shot by Eliot Rahal. It features Madam Satan not only trying to escape Hell, but also stepping into the role as host for a series of scary stories, paying homage to legendary television anthologies and iconic horror hosts like Rod Serling, Elvira, and Vincent Price. Madam Satan will play tour guide as readers explore the horrifying underbelly of Riverdale while the classic Archie Comics characters face their deepest fears, along with some frightful bonus content Archie horror fans will absolutely die for.

“This horror anthology is the perfect love letter to both classic Archie tales and the more modern stories,” explained Rotante. “The genre lends itself to have a timeless appeal to audiences and I believe that plays a factor into the excitement for Archie horror comics.” Additionally, the project will bring together a multitude of writers and artists. “One of my goals in editorial is to create more opportunities to bring a wide range of talent into the Archie Comics fold and champion underseen writers and artists,” she goes on to note. “This is just the first in a variety of anthology-style one-shots that we’ll be releasing as we close out 2021 and enter the new year. Working in this format gives us the chance to tackle a variety of genres and collaborate with exciting new talent and long-time favorites simultaneously. We can’t wait to share more news soon!”

“It’s been an honor to have Jamie’s work and vision in the Archie Comics universe over the last decade,” said Archie Comics CEO/Publisher Jon Goldwater. “Jamie has a clear vision for not only storytelling, but for nurturing the best talent to craft amazing stories. We can’t wait for fans to see this new book and future projects under Jamie’s leadership.”

THE FUTURE OF ARCHIE COMICS STARTS HERE IN AN ALL-NEW ANTHOLOGY-STYLE ONE-SHOT!

Madam Satan is our tour guide into this horrific world exploring the underbelly of Riverdale and its surrounding areas! Madam Satan is trying to escape Hell. She goes through the circles of Hell in reverse. Along the way she meets lost/tortured souls who tell their stories—like that of Archie Andrews, who accepted a seemingly normal job as the nighttime security shift at Riverdale’s local pizzeria and children’s mascot entertainment venue. Only to learn that the venue harbors a deep, dark, robotic, monstrous secret! And then there’s Jughead Jones, a teen who never met a food he didn’t like. Until now. What is that eerie noise coming from the kitchen…? All that plus more bonus frightful content sure to delight all Archie horror fans!