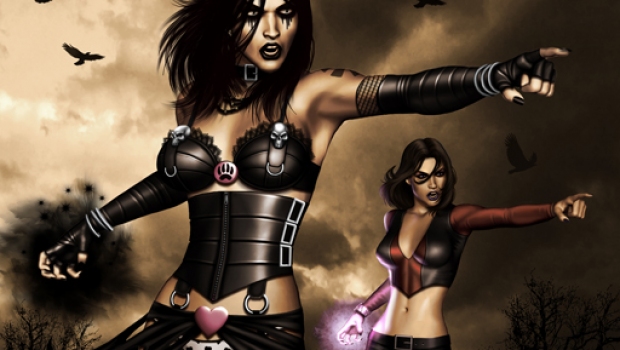 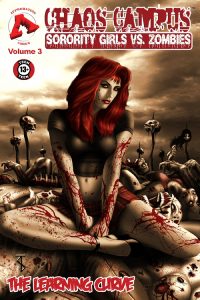 Howdy, Sinners! If you’re new to the congregation, allow me to reintroduce myself… my name is B. Alex Thompson and I write them there “funny books!” Though I write comics of various genres (mostly horror or drama), I’m best known for my Action/Horror-Comedy series”Chaos Campus: Sorority Girls vs. Zombies.”

In this third retrospective (see retrospectives part 1 and part 2 if you haven’t already), we will be looking at the five mind bending, crazy train, dimension hopping issues that make up TPB Volume 3 of the series (and if you’re interested, you can buy a print copy right here).

I always refer to the Chaos Campus series as an ongoing experiment in storytelling and characterization. This is a section of the story that really shows this perspective. Still learning about what works and doesn’t work with comedy/humor, I tried to step up my game with bringing the funny with both physical gags and conversational wordplay.

Does that sound interesting? I hope so! C’mon in and join me, starting with…

Issue Synopsis: Trapped inside an extra-dimensional cube, our heroines have to escape many challenging levels from video games of old (while also eluding the clutches of Kurtis Kasey and Winky the One-Eyed Monster)! Anyone got a cheat code for extra lives?!

Issue Retrospective: One of my early goals for the series was for each issue to be “new reader” friendly. This way a person could pick up any issue of the series and could finish with a decent understanding of the girls, the series concept, and have a fully finished story all within 22 pages. I feel that this issue is one of those nearly perfect issues that checks all of those boxes. There’s action, humorous bickering, fast paced verbal jokes, physical sight gags, and an overall theme of video game parodies. As the creator, I think that there are a lot of missed swings in this ongoing experiment, but to me this particular issue is a home run!

Favorite Panel or Gag: There were so many running or throwaway gags in this issue which made it really hard to choose just one. I ended up settling on this “secret passageway” joke because it’s so pervy, but you kinda have to use your brain to get it (the fine line this series straddles constantly)!

Issue Synopsis:After traveling to different alternate dimensions, the girls end up on a beautiful lush world with murdered zombie corpses strewn around. The only living native of the world they discover is a feral human/zombie hybrid dubbed “Patient X!” Can our trio elude the brawling natures of Patient X and Kurtis Kasey, plus a massive laboratory filled with super strong and super agile zombies long enough to make the jump to the next dimension?!

Issue Retrospective: This is another decently done issue that serves as a potential one-shot to a new reader (actually, pretty much each of the issues in this volume does this job to varying degrees). So instead of patting myself on the back for a job well done, we’ll jump into another confession (because like chicken soup, it’s good for the soul).

I mentioned in the previous retrospectives about how I started this series as a joke and readership convinced me to make more. So after I realized this was a long term thing, I started to make a rough outline of where the stories could go. The reason why issues #5-12 are so fast paced is because they were originally issues #25-50 in that original rough outline. When you’re starting out a career in writing comics, you can have lofty goals and plans. But the realities of time, responsibilities, and limited resources will make you reevaluate, restructure, and reorganize things to push the work out.

With those limitations in mind, storylines were compressed and edited greatly resulting in the issues that actually made it through production and into print.Personally, I think it all works out decently well. But I kinda wish I had more time and stories between things to make the events seem slightly less abrupt (and for some people, confusing). 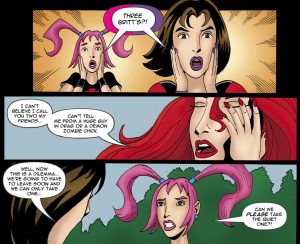 Favorite Panel or Gag: This is so dumb and probably only amuses me, but it cracks me up how Paige and Jamie pretend not to be able to tell Britt apart from Kurtis in drag and Patient X. Poor Brittany becomes so frustrated with them and it’s just a small example of the goofy things friends do to each other at random times.

Also, I think it’s funny to me because it harkens back to a scene in TMNT2: The Secret of the Ooze where the Turtles debate over who will take on “the ugly one.”

Issue Retrospective: This issue was written by John Ward who is a good friend and one of the funniest people I know. If you check the credits of each issue of the series, he’s credited as “Post-Scripting & Polish.” What does that mean? John is the guy who takes the lettered art and adds in “punch up” dialogue to layer in even more humor. Believe me, without John’s contributions, the series wouldn’t be half as funny as it is!

So knowing John is a writer in his own right, I reached out to him to do a full issue for the newly created Extra Credit series. I was thankful he agreed as he took two funny ideas I had no intention of following up on and fleshing them out into great additions to the storyline! I’m still hoping one day he’ll find a break in his busy schedule to do another Extra Credit issue or two!

Favorite Panel or Gag: The highlight of this issue is defiantly the “Swine AIDS” running gag. I tend to be a news junkie and after so many years you begin to notice how the mainstream media loves to over dramatize certain “outbreaks” for various reasons. Around the time of this issue, there was the “Swine Flu” epidemic. This was a fun jab at how people can hear a buzz term and be deathly afraid of it without really knowing what it is or how it’s spread.

Issue Synopsis: Still traveling to various alternate dimensions, Paige finds herself separated from her friends in the spooky house of Violet Grimm a.k.a. “Dogwitch!” After a few misunderstandings to feel each other out, they soon discover Jamie and Britt lost within the deadly woods on Violet’s property! Can Violet’s crash course in magic give Paige the ability to save her friends from zombies, Kurtis, Patient X, and huge poisonous spiders? 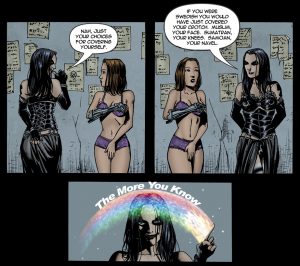 Issue Retrospective: I’ve been a fan of Dan Schaffer as a person and his series Dogwitch for ages. I was disappointed that he decided to end the Dogwitch series, but he left it open for Violet to have other stories and adventures. With this in mind, I presented Dan with a proposed crossover issue and he agreed! This is one of my favorite issues of Chaos Campus ever and another great example of what creators can do when they combine their talents!

Favorite Panel or Gag: Again, with so many jokes to choose from, it’s so tough to select just one. I settled on the gag where Paige is amazed that Violet determined that she was an American from her underwear.

Plus you have to love any, “The More You Know” reference. I wish I could add one of those in each issue!

Issue Synopsis:Paige finds herself in the Technicolor land of Oz! Can she find all her friends to help her defeat the Wicked Witch, Tess Raven?! Can the girls find their way home?! Will this dimension hopping ever end?!?!

Issue Retrospective: In the middle of writing the script for this issue, I got stuck and needed inspiration to finish it. Discussing it with friend and roommate Ant’juanAvri, we discovered that I’ve never even watched The Wizard of Oz (the thing this issue is mostly a parody of). So upon renting (this was back when there were physical movie rental stores), watching, and researching the film… the rest of the story fell into place.

As a creator, this is an example of allowing your character/s to go in directions outside of your own experiences, likes/dislikes, and perspectives. When they do, follow their lead, research the new material, embrace why it’s important to your character and great new doors might open for you and your story!

Favorite Panel or Gag: Great fiction comes from making your characters suffer. It’s funny and yet endearing that Paige idealizes “The Wizard of Oz” so much. This line of dialogue pretty much sums up her frustration with most of the events within this issue. Even in an alternate reality orchestrated by her subconscious, poor Paige Patton can’t escape the invasion of zombies. Sadly this is subtext to her reality for the rest of the series, but you will have to experience that yourself!

I’m currently hard at work on the Act 2 issues of the Chaos Campus series. Taking a look back at the triumphs and missteps of the early Act 1 stories helps me stay focused and guides me on the path of where the story should go moving forward. That said, I hope you’re enjoying the ride no matter where you are currently in the story.

Before we go, I wanted to remind you to like us on the Chaos Campus and Approbation Facebook pages! We’re going to be doing some contests on both pages to give away some FREESTUFF, so don’t miss YOUR opportunity to WIN!