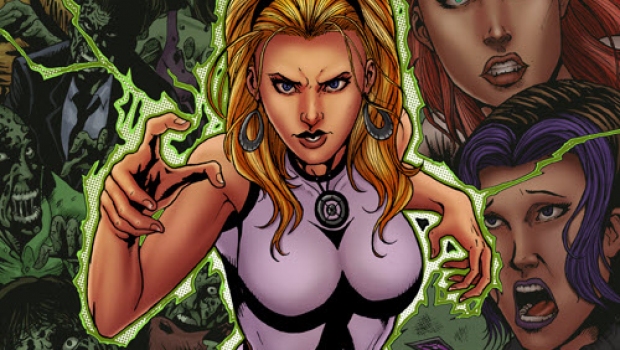 A Retrospective of Chaos Campus: Sorority Girls vs. Zombies PART 5

Here it is, the fifth retrospective for the Chaos Campus: Sorority Girls vs. Zombies series. If you’re new here, welcome! We’re happy that you’ve stopped in and after this we hope you stay as a part of our happy (though slightly deranged) family! For those of you who have been in the family a while, I say, “HA! I told you it wouldn’t be another six months until the next Retrospective! Again, I say, HA!”

With that small bit of playful gloating out of the way, let’s go into the issues that make up Volume Five of the Chaos Campus series. As the college campus was overrun by zombies yet AGAIN, our intrepid trio of heroines hasventured out into the wide world once again in search of refuge. What will they run across in this section of the story?

Well, we’re changing direction for your erection! (Yes, this includes “lady boners!” We’re inclusive to all genders around these parts!)

Crude jokes aside, I’ve mentioned that the Chaos Campus series is an ongoing experiment. The first three volumes really went into some crazy and far-out directions. Volume four brought things back down to a more grounded level. This volume cranks that dial back up to “Crazy,” so I hope you’re ready to get back on that wild ride!

Issue Synopsis: Seeking refuge from the zombies within a museum, the girls stumble upon an ancient Egyptian exhibit that brings forth a horde of mummies! Paige’s battle with lead mummy Khaldun knocks the girls into “The Bleed,” but in different bodies!

Issue Retrospective: This is one of my favorite episodes of the whole series. Ever since I was a kid, I’ve always loved altered perspectives… things that are similar, but different ways (subtle or extreme). So fiction with alternate universes, twins, and body switching were some of my favorite stories. I was able to show that love within this particular issue.

I’ve wanted to do a story like this one in Chaos Campus for a while, but for it to be effective I knew I had to have a good amount of issues before it so people would know the characters as they really are. With sixteen issues of the series gone by, I figured readers had a good handle on our heroines and their personalities so the body switching wouldn’t be TOO confusing. 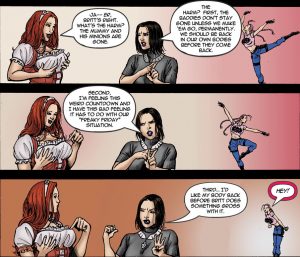 For the story, this issue brought a few important things to the story as a whole. One, Jamie gains infinite ammo for her handguns. So from this point on, Jamie doesn’t need to ever reload her personal guns thanks to accidental magic… weeeee! We gained a lot of character development and a little more explanation to why our heroines are the way they are. The last thing I’ll bring up here is our “villain of the week,” Khaldun. Though it seems like everything was wrapped up in a neat bow, all of the backstory surrounding him will play an integral part in Act 3.

Favorite Panel or Gag: Again, being one of my favorite issues of the whole series, it was tough narrowing down my favorite bit. I settled on this scene as it pretty much shows the personalities of all three of our heroines dealing with their current body-switch situation.

Issue Synopsis:Lost in the woods with no zombies for miles, the girls stumble upon a small town tavern. The locals give a stern warning to leave, but when the girls investigate they are attacked by vampires! Guest starring Pandora Doll from Vampires Unlimited!

Issue Retrospective: For anyone who has read both series (and I thank you SO MUCH for your devoted readership), Vampires Unlimited and Chaos Campus are completely different in tone and story subject matter. So why bring an alternate universe version of Pandora Doll into the Chaos Campus series?

This issue was actually intended to be another crossover issue with another creator. The creator loved the script, but sadly they weren’t too fond of the art style of this issue and the way their character was depicted. The art for the issue was nearly completed by the time this agreement was resolved, so I had to scramble… I needed a female vampire queen to fill the role in the story’s climax.

After a short time of looking outward, I finally looked inward. I have a property of established vampire characters. Pandora Doll is known and was the face for Approbation Comics for years. The established tone/story problem was explained away as an alternate universe version of Pandora Doll… a few dialogue changes and BOOM, the issue came out pretty well considering the final hour hiccups!

Favorite Panel or Gag: Realizing the past few issues of the series were a lot more serious and story driven, I tried to compensate with extra fan-service and pushing the sexuality more within the issues of this volume. I might’ve went overboard… you be the judge. Whatever the side of the fence you choose, this is my message to you…

Issue Synopsis:The girls seek refuge from the zombie horde within an occupied log cabin. Not quite a house, but close enough (and we all know what happens when the girls take refuge in a strange house…)! This time? WEREWOLVES!!!

Issue Retrospective: Another type of story I’ve always enjoyed is when the characters you rely upon to do their usual tasks (the leader, the muscle, the brain, etc.) are incapacitated or turned evil and the comic relief character has to muster up the strength and courage to carry the full story. This is that episode for me with Brittany. For nearly twenty issues, Britt has been the joke of the series… she’s ditzy, she’s over-sexualized, she’s easily distracted, she’s random, and as Jamie is quick to point out, she’s pretty much useless.

But is she really?

I enjoy this issue because it shows that all three of our heroines are worth their salt and deserve to be survivors in this zany zombie apocalypse. If you’ve been following the series from the start, I’m sure you’ve noticed the hints towards Britt’s potential. With this issue, it was fun to show her prove it.

Favorite Panel or Gag: The scenes I REALLY want to nominate are far too spoiler-ific, so you’ll have to settle on this panel which shows Britt getting her hardcore on. You get ’em, girl!

Issue Synopsis:Our Chaos trio find themselves in a town that zombies stay far away from… a town full of nothing but sexy blonde supermodels. Is this paradise or something far worse than anything they’ve faced up to this point? The ca-ca hits the fan in the last issue of Act 1!

Issue Retrospective: When Mitzi Peterson was introduced by name back in issue #2, it was all a part of an ongoing gag for that issue alone. Someone had to lead the E.A.Z.Y. sorority and someone had to embody the superficiality our heroines were escaping from during the budding zombie apocalypse. That person ended up being Mitzi. I didn’t really have any long term plans for the character, but I saw potential in her, which is why she and her group were sent off into the unknown. Perhaps they’d die, but maybe we could bring them back if they’d be useful to the story.

As the series progressed, we brought Mitzi back in the “School Dazed” arc. Again, she was shuffled off into the unknown. But by that point I realized who and what Mitzi to the series. Every hero needs their arch-nemesis. Sure, our heroines have their fair share of villains… zombies (it’s in the series title)… slashers… the enigmatic Tech Locke and Skull Drudgery. While those villains lend to great visuals and epic physical feats, many times the best opponents come from shared history, common origins, and similar grounds. 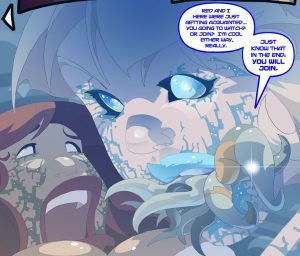 With this last issue of Act 1, we see Mitzi go from reoccurring nuisance to becoming a major player in the big games to come. It might’ve taken twenty issues (well, twenty-five if you count the Extra Credit issues, too) to set up our chess board, but now you have everything you need to enter the next stage of the Chaos Campus story.

Get ready for Act 2… if you’ve enjoyed the ride so far, strap in for the next level of action, horror, and crazy shenanigans!

Favorite Panel or Gag: This is a slight spoiler, but not enough to ruin the issue if you haven’t read it yet. I love this dramatic reveal… like the Chaos Campus series as a whole; it’s dramatic, funny, and scary all at once!

Issue Synopsis:At the start of the zombie apocalypse, Mitzi and her Blondes split up from our Chaos Trio. Something traumatizing happened that Mitzi will not talk about. Find out what they went through in this very issue!

Issue Retrospective: In this supplemental issue we FINALLY get to see what Mitzi and her Blondes experienced after they left our heroines back in issue #2. It’s something I always wanted to see, but I couldn’t think of anything. Thankfully my friend Jessie had time in his schedule and wanted to tackle the challenge and I was happy with what he came up with.

Favorite Panel or Gag: On the very first page, this scene pretty much summarizes the silly struggles and power dynamics between Mitzi and her sorority subordinates.

As I wrap this up, I wanted to offer a HUGE THANK YOU to everyone who have been following these Retrospectives and buying these Chaos Campus issues! Whether you prefer “traditional” print or “wave of the future” digital, your hard earned dollars are what allows us to continue making these fun bits of escapism. Not many comic creators are fortunate enough to make a living creating comics. But it’s because of people like YOU who are willing to open your wallets, purses, and swiping those cards… YOU make it possible for a series like Chaos Campus to reach 20, 25, 30 issues… and beyond!

Again, THANK YOU from all of us on the Chaos Campus and Approbation Comics team. It’s only because of YOUR support that we can do ANY of this.

Speaking of digital comics, if you’re buying copies of the series on ComiXology, could you rate each issue with five stars? It helps new readers find our comics and the more readers we have, the more comics we can make!

Oh, if you haven’t already, please “like” us on the Chaos Campus and Approbation Facebook pages! Slowly we will be using those pages to show extra art, advance previews, promos, polls, and those contests for possible free stuff!

That’s all we have for today, but stay tuned for the next Retrospective where we’ll be discussing the first issues of Act 2… Volume Six: Initiation! Until then, make sure that you ENJOY the FUN side of a zombie apocalypse! 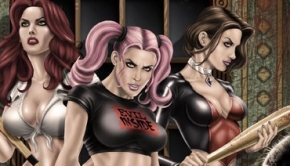 A Retrospective of Chaos Campus: Sorority Girls vs. Zombies PART 4 →