Action Lab Entertainment has provided C4S with their December 2016 Solicitations. 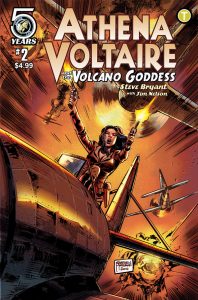 After Henri is attacked, Detective Autry zeroes in on her prime suspects, while Dead Jessica’s words send Addison looking for information at Mercy Hospital from Iris.

As Katie’s search for the new Vampblade costume continues, will one giant blade give this warrior angel enough nerve to take on the latest and greatest other-dimensional foe?!? It’s Vampblade 2.0 – harder, faster, stranger!!!

When Janey and her new road warriors cross paths with an old long-hauling lycanthropic foe, he calls on The Brotherhood of Monster Truckers to help settle the score. Now it’s an all-out undead battle of the blacktop!!

Features 3 regular and risqué variants, including a pair of variants by new series artist Celor!!

Award winning author and comics legend, Peter David, brings the adaptation of his novel, Artful, to Action Lab! Artful is the dark, funny, and action-packed story of one of the most fascinating characters in literary history, the Artful Dodger from the classic Oliver Twist, this time with a twist: Vampires.

Having successfully completed her first mission to wake up and heal the planet Gremon, Chkarta Dola Regn should be celebrating. Instead she is fleeing from the brutal and greedy Baron Korup. Meanwhile, her brother Picar and her mentor Operi attempt to rescue their friend Chay from the clutches of the duplicitous Gen and the conniving Gurk. This all-ages trade paperback collects Regn and Picar’s further adventures on Gremon in AWAKE #5-8.

Both the colonists and the Maasym struggle between peace and revenge in the aftermath of a brutal assassination. The path chosen could mean life or death for the colony.

Out to recruit more brigands for their heist, Stilian Desault and Veina arrive at the Barren Halls Prison. They’ve come with a box full of stolen gold to buy a good man his freedom. But the trouble with smart people making dodgy deals is they don’t settle for less and often get more than they bargained for. There’s new management in-charge of Barren Halls and they’re not about to let anyone go free.

Love is in the air when the Cthulhu cult converts its faithful into hideous flesh beasts. In Vienna, Hitler responds to an RSVP from something old. Lovecraft and Houdini find themselves neck-deep in something new. Sonia Greene is hunted for something borrowed. And after reconciling the possibility of never finding Earhart, Tesla is blue. “Tying the Knot” collects HERALD: LOVECRAFT & TESLA #7-9.

When Cat Noir is suspected of theft, Ladybug has to prove that her partner is innocent and that a Copycat is prowling around Paris. But will Ladybug be able to tell the truth from the lies?

More ghosts from Andre Toulon’s past come to light as he and the Retro Puppets dig deeper into the truths behind the Peterstown cult. The Great Transition is coming. Can Toulon and the Puppets stop it? Should they even try?

The Kill Cover interlocks with the Halloween Special, Issues #19, and 21!

For the first time in nearly 30 years the Bodega Bay Inn is open for business. Families, business men, and couples just looking to get away have flocked to the isolated ocean-side hotel. Even the puppets have been behaving under the guidance of Anthony. But some people just can’t let a good thing last. VACANCY collects issues 16-18 of the ongoing Puppet Master series!

After the death of his mother, Christian moves with his single father to the sleepy coastal town of Shell Bay. Upon being bullied at his new school, he’s quickly befriended by the group of “weird” kids. But what Christian doesn’t know is that their playful occult shenanigans may actually be rituals that damn his soul!

VORACIOUS: Feeding Time picks up right where the hit series, VORACIOUS, left off! Chef Nate Willner hunts dinosaurs in the past and secretly serves them at his restaurant in the present. But unbeknownst to him, he’s actually been hunting in an alternate reality – a world where dinosaurs evolve into Saurians, a technologically advanced race that rules the far future! Some of these Saurians have mysteriously started disappearing from Cretaceous City and the local authorities are not happy about it…