C4S with their solicitations ..." /> Action Lab Entertainment Solicitations for May 2016 – Comics for Sinners
Solicits 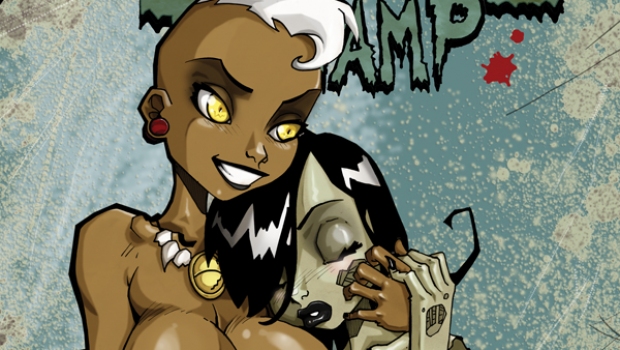 Action Lab Entertainment Solicitations for May 2016

Action Lab Entertainment provided C4S with their solicitations for May 2016.

With Xula and Zombie Tramp reunited once more, the tables have turned in the battle against Tyrone Fisk and what seemed like his unstoppable voodoo counterpart, Papa Yagga. But a new arrival entering the game… Morning, The Red Head of the Dead, returns with her own agendas. Who’s side will she take? Stay tuned. Lock your doors. Don’t let your momma see the blood soaked continuation of carnage and mayhem that is Pimps, Ho’s, and Hocus Pocus part 3!

When a young comic shop employee is transformed by mystical blades into a walking talking (slicing & dicing) 90s comic book bad girl, she must quickly learn how to survive the new grotesque world the blades reveal. Now, other-dimensional parasites hidden all around us resembling the “space vampires” from the 90s comic, Vampblade, are all too real, and out for her blood!

Collects the red hot complete first story arc of the new series from the co-writer and artist of the wildly popular Zombie Tramp, and features two all new collectible limited edition variant covers.

The Trent List is getting shorter as Addison continues to rack up her kills, but just as she reaches the top of her game, her adversaries make their move. Detective Tico and his crew get their hands on the Wolf of Rivergrove, but have they finally caught Addison or is it a case of mistaken identity?

Debuting at Halloween ComicFest and in the pages of Zombie Tramp, the co-writer and artist of Zombie Tramp unleash breakout character Vampblade in her own all-new ongoing series!
When young comic shop employee Katie Carva is transformed by mystical blades into a walking talking (slicing & dicing) 90s comic book bad girl, she must quickly learn how to survive the new grotesque world the blades reveal. Now, other-dimensional parasites hidden all around us resembling the “space vampires” from the 90s comic, Vampblade, are all too real, and out for her blood!

AOD Collectables offers this new exclusive variant cover from legendary artist Simon Bisley, which comes in both a regular and a risqué variation.

Who do you call when your dog is unjustly imprisoned? Action Lab, of course! In this issue, Percy and the Action Lab League agree to help Marguerite prove her brother’s innocence. But can they break him out of St. Roch’s in time?

Virtue has cleaned up crime in Apollo Bay and now has Midnight Tiger and Stray dead to rights. Will Molly Danger show up in time to save them? And Medulla’s plan is put in motion…how does Jake fit in?

Cascade makes his move to power up his portal engine…which will destroy our world! Jake has teamed up with Medula. Has the entire world gone mad?? Molly, Virtue, Stray and Midnight Tiger are running out of time to save this, and every, universe!

This is it! The fight for the survival of the Actionverse is here! Only one man has the ability to stop him…and it’s NOT one of our heroes! Will Medulla help or will he show his true colors? And not a hoax, not a dream, not an imaginary tale…one of our heroes DIES!

In this prequel to the ongoing series, Regn learns to use her powers, and gets into trouble, with fellow cadet, Joppin, on the Dola training planet, Exterra, while Chay rescues young Picar from an angry mob.

Betrayed by Gen, Chay and Bashi are prisoners in the Baron’s castle! Gremon may finally be at peace, but the sibling rivalry between Regn and Picar is just starting to erupt. Will they stop bickering long enough to battle their way through Gurk and an army of Brute Guardsmen? Don’t count on it.

BIGFOOT SWORD OF THE EARTHMAN #6

Hunted and tortured beyond the point of exhaustion, it’s one against a thousand as the “Earthman” faces the Red Demon of the Desert and the Great Lord Jeoffa’s alien army. This issue … everything ends! It’s the conclusion of the ultimate sword, sorcery and sasquatch saga! Variant cover by Luke Parker!

From the cult classic Full Moon film comes the all new epic tale of the serial-killing dough boy! There’s new designer drug called Confection and the abandoned Betty’s Bakery has been taken over by a gang of drug dealers! But by using a leftover box of seasoning containing the remaining ashes of Millard Findlemeyer, the gang has unwittingly baked up one killer cookie!

THE HOUSE OF MONTRESOR #4

In the thrilling conclusion of this Poe-inspired sequel, Edana now sees that every brick in the House of Montresor is set on a foundation of secrets, lies and murder. Count Montresor has finally put the last surviving member of the Fortunato clan right where he wants her. To escape her family’s fate, Edana must solve the mystery of why Montresor hates the Fortunato family, or else a carefully planned revenge fifty years in the making will finally be complete.

Depraved vengeance continues in The House of Montresor, a sequel to Edgar Allan Poe’s classic tale, “The Cask of Amontillado.”

Kai, Zawa, Skirnir and L’derOne converge upon a dwarven town sieged by the all-powerful Overq’sai and his forces. A judgement will be made leaving the fates of the town and their champions hanging in the balance. This is the action packed conclusion to the first chapter in our epic story.

Winter, Part 3: “Chocolatears” – With her friends gone and nothing left to lose, Saffron makes Cassia an offer she can’t refuse: she wants in on the Patty Cakes enterprise. And poor Poppy, drifting for weeks unnoticed by her best friend, finally gives in completely to her secret brownie addiction.

Our heroines arrive in the Dwarf kingdom of the rim to a less than warm welcome – what with them riding in on a dragon and all – but Bedelia’s family is here to save the day, right? Right? Find out as our heroines face new dangers and icy weather in chapter two of “Make Yourself”.

The Puppets stand as the only line of defense against Anapa’s forces. With the addition of the Golem to their ranks, can they even the odds or is the battle already lost for Toulon’s stringless Puppets? Don’t miss the conclusion to the Blood Debt story arc!

The fallout from their first adventure has left Raven’s crew in disarray, several of them injured and one crew member on the verge of death. Raven will do anything to save her. A small comfort, when all she can do is stay by her side, talk to her, and tell her a story. The story of how the Baroness Xingtao met the love of her life.

The Soft Spots toy line gets the Action Lab treatment as young Sophia learns lessons
of friendship with her colorful cast of pets… the Soft Spots! Pick up this exciting first
all-ages issue; perfect for the new comic reader!

It’s the first day of the strangest temp job Tim has ever had: in the HR department of the world’s greatest super team. He discovers that with great power comes great stupidity. Reprinting Season One of the sold-out, indie hit. Just in time for Season Two from Action Lab in April.