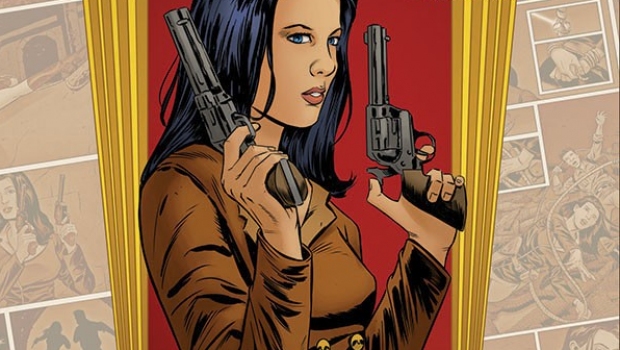 Action Lab Entertainment has provided C4S with their November 2016 Solicitations.

In the knuckle-dusting style of classic pulp adventure comes Athena Voltaire, a courageous, globetrotting aviatrix who takes on Nazis, zombies, and unspeakable occult creatures! This whopping 224-page tome rescripts and remasters Athena’s adventures from the long-running, Eisner-nominated comic by Steve Bryant, including over 50 pages of new material created for the Compendium!

The fan-favorite pulp heroine returns in an all-new miniseries written and drawn by Eisner and Manning Award-nominated creator Steve Bryant. When her father gains possession of a legendary necklace, Athena Voltaire must save him from both strange assassins and the Nazis, who want the power the artifact could unlock! Variant cover by comics legend Michael (MADMAN) Allred!

On the road again… everyone’s favorite streetwalking dead hits the highway once more, but this time she’s got friends. Who’s along for the ride, and what’s the destination? Hopefully it’s not your town!!

After her ordeal with fighting Demons, both physical and emotional, Janey makes an effort to regroup and keep a promise she made to herself – busting her father out of prison!! Locked up with vindictive wardens, disgraced sandwich kings, and past enemies thought to be dead, Janey discovers more secrets about her past, while trying to bust her father out and take down a few assholes in the process!

NEW STORY ARC! NEW ARTIST! Percy and the Action Lab League are on the case as a new dog enters their lives as they continue their search for the dogs that have gone missing in Canaan City. And it looks like Percy’s secret has been revealed…to two unlikely characters. Join us as we welcome Reilly Leeds on as new regular series artist!

BEYOND THE WESTERN DEEP: VOLUME 2

As conflict looms between ancient enemies, the fragile truce that held civilization together has begun to unravel. A small peace envoy travels north to prevent war, while a ragtag army of rebels marches south to create it. Experience the latest chapter of this all-ages fantasy saga in its second collected volume!

Co-Creators & Writers Michael R. Martin & Adam Orndorf give a fresh infusion of blood into the vampire genre with the Glenny Family. Brought to life by the illustrations of Roy Allan Martinez and colors of Raymund Lee, Blood & Dust pushes the boundaries of horror and explores dark places children shouldn’t be allowed to go…especially the swamp.

Pulled from death row and recruited by the secretive inquisition to steal an artifact called The Myros Pendulum, Stilian Desault now paired with an old colleague, Veina must put together a group of Brigands for the heist of their lives. But there are no happy endings or quick deaths for battle-forged blades. Stilian will soon discover that things are about to go very wrong.

When Houdini and Lovecraft are taken to Sean Breag’s underground ceremony room, Sonia Greene and Tesla rush to save them from the transformative power of the accursed needle of Zur’in Xal in a confrontation that leaves more questions than answers.

Exploring the world they saved. From the dangers of the desert, to a remote jungle island, and finally the Far East, the Hero Cats are ready for anything.

Hawk Moth turns Jalil, a young Egyptologist, into Pharaoh, a super-villain with the powers of the gods of Ancient Egypt. Pharaoh intends to sacrifice Alya in a ritual at the foot of the Louvre Pyramid in order to bring an ancient Egyptian princess back to life. In order to stop him, Ladybug and Cat Noir will have to fight against an army of mummies and to unearth strange secrets which date back over 5,000 years…

Hawk Moth is at it again!

Follow Ladybug and Cat Noir as they save Paris from Hawk Moth’s akumatized citizens such as, Roger Cop, whose embodiment of the law ensures a tyrannical jusrice, the Bubbler, who wants a city of all children, and Mr. Pigeon, whose aim is a city of birds! Will Paris ever be safe from Hawk Moth and his akuma? There’s only one way to find out!

Successfully avoiding certain death in the cursed Wraith Wood, Miru, Scribbles, 9Teen, and the mysterious Kayelyn stare down even more danger as they’re besieged by an ancient horror. With the surface clearly not smooth sailing, the group treks to the dark reaches of Gaia’s lower depths—The Underworks.

MONTY THE DINOSAUR: BOOK ONE

Here it is! The gut­busting, cookie­munching, swing set­destroying adventures of your favorite prehistoric pal and his best friend all in one nifty collection. Collects issues 1­3 of Action Lab Entertainment’s smash hit all­ages romp.

Armed with the Retro Puppets, Andre Toulon makes his way across the country to the rolling hills of West Virginia in search of a particular puppet that was stolen from him decades ago: Mephisto. What secrets do the residents of the reclusive commune of Peterstown hold? The truth comes out in Retro Now!

This is Spinal Tap meets a Rankin/Bass Christmas special!

The ultimate holiday tale for metalheads! Sleigher is the most recent heir of the “Santa Claus” mantle… even if it’s not really his bag. He’d rather slam back bourbon than glasses of milk, and blast metal instead of carols. But when a long forgotten member of Santa’s rogues gallery rears his ugly head to reap chaos and destruction, Sleigher may have found his true calling—dishing out a holiday ass whoopin!!!