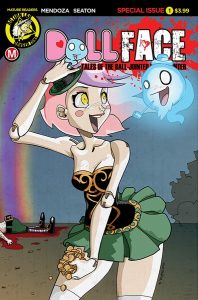 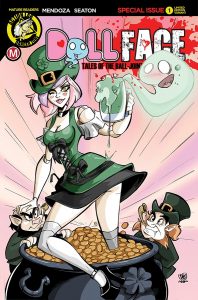 After losing everything she wanted to protect, Addison decides the fate of both her own future and that of the city, as Iris steps up to stop her. The shocking series conclusion.

Now that we know of Xula’s secret alliance with Kaiju Queen, will she prove her worthiness in the next task that has been laid out for her? Fan favorite voodoo priestess Xula gets the spotlight!

Features 3 regular and risqué variants, including a pair of covers by series creator Dan Mendoza (DollFace)!!!

Zombie Tramp hits the road again, but this time she’s bringing some undead friends, including her space vampire slaying frenemy, Vampblade! But when they cross paths with her old long-hauling lycanthropic foe and his new Brotherhood of Monster Truckers, it quickly becomes a fast and furious battle of the blacktop!!!

Percy’s secret has been revealed! Is this the end of the Action Lab League? But it’s only been six issues! More secrets are exposed as we meet our newest League member…she’s out of this world!

Sam Kickwell was the best of the best–until a terrible karate accident involving his brother and ninjas convinced him to hang up his black belt. Now he and his appendage-less sibling have moved to a town that has outlawed martial arts; a place they can finally be at peace—until the fateful day his enemies arrive, forcing him back into the only life he’s ever known: Karate fighting for America.

The final issue of the hit mini is HERE!

The sky is blood red as the Myros Comet comes ever close to the port-city of Cartaduan. Half of our heroes are trapped, and the others powerless to save them. New allegiances will be forged, and scores will be settled. War is on the horizon, and a reckoning is at hand.

One last time into the fray, Brigands!

Somehow Anthony Zane has killed top assassin, Smash Brannagan. Now he has 72 hours to prove that he is a worthy replacement… and his fate will be decided in THE OCTAGON.

Marinette’s class has to make a short horror film for a festival. But the lead actress, Mylene, cannot play her part because she’s too scared. She leaves the set as she can no longer bear some of her classmates’ reproaches. Akumatized, she turns into Terrificator, a slimy monster that feeds itself with the fear it causes.

Artful and Bram must break into Bedlam to save Drina. But are they already too late? And can they survive the hospital staff and a horde of vampires thirsty for their blood?

Christian has to kill his friends to break the curse, but when his friends strike first will Christian be ready for them? There will be death in this issue, and the Circle will get smaller.

Gus Horncrasher’s life is unraveling. His best friend has gone rogue and his wife has vanished from existence. To try and get them back, and reverse the devastation to the Saurian timeline, he must place his trust in the man responsible…