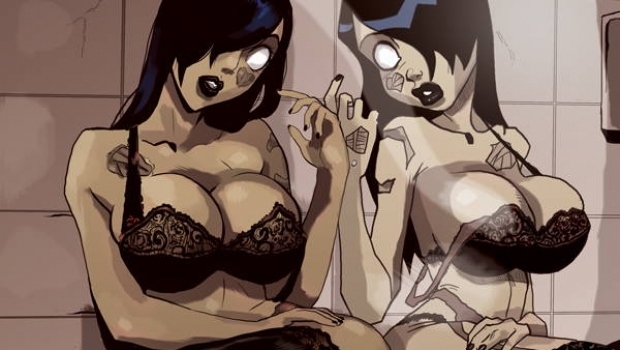 Action Lab has provided C4S with their November 2014 Solicitations.

Janey, our titular Zombie Tramp, is back on the road. When a simple pit stop at a desert biker bar attracts unwanted attention, she quickly finds herself tested yet again… by a monster more powerful then her?! Supernatural bar fighting, and blacktop dueling in a bikini and leather gear – it’s just another day for Zombie Tramp. Includes a variant cover (limited to 1,500 copies) and a risqué variant, limited to 2,000 copies, by Dennis Budd!

Oni 鬼 (Demon): After the escape of Shianndrea and her team in New Tokyo, the Oni sets his sights on the southern security outpost of the Toshigawa Clan. Master Gaudient chooses a team to assist their fellow ninja but orders Ai and Shianndrea to stay behind. The girls make the risky decision to join the battle anyway. Meanwhile, Hamasuke’s anger from being “overshadowed” could prove to be the downfall of the Toshigawa Clan.

When Queen Neva takes Yuri and Valentina prisoner, she puts them to work in the infamous Blood Mines of Woodmere. Meanwhile, Neva and her dark sorcerer Narog
devise a plot to steal their power. Also in this issue: A steadfast messenger must carry the fate of the war across an unforgiving landscape!

Standing before a jury of nine gods, Amarosa pleads for a chance to risk her life
and gain entry to the Wishing Well where she will attempt to fight her way
through and survive nine trials to claim her prize: a single wish that will save her
terminally-ill brother. Another Action Lab hit in the making!
32 pgs./Teen/ FC $3.99

Jack’s past meets his present, and his recently “upgraded” Werewolf curse is put to the test. When an all-out zombie attack threatens not just Jack, but his human girlfriend and new vampire ally, can he wield the mysterious Constantine Technology to save those that matter most to him?

Everything has gone to crap. One week ago, Tom Ferris worked in an office. Today, two of his costumed team members are dead, the bank job has failed, and he finds himself racing toward the last person in the city who can help him. But the Black Baron still has a few secrets left hidden… and the time has come to show them off. The conclusion has come. The Dry Spell is over. And the city will never forget him again.
32 pgs./Mature Readers/ FC $3.99

Everyone’s favorite assassin monkey Mister Everything’s shrouded history begins to unravel as Mindwolf fights for her right to party…and stay alive! PLUS: Aaron and crew are captured and interrogated at the hands of unknown enemies! PLUS, PLUS: Death–horrible, tear-inducing death–awaits in a shocking scene so shocking it shocked us!

THE F1RST HERO #4
Writer(s): Anthony Ruttgaizer
Artist Name(s): Phillip Sevy (art), Fred C Stresing (letters/colors)
Cover Artist(s): Lee Moder
The streets of Philadelphia have been turned into a war zone with Jake Roth standing
at ground zero. All Jake wants now is to get home in one piece. But how will the extrahumans who saved him from being captured by the authorities react if he rejects an offer to join their insanity-fuelled revolution? The climatic final issue of Volume 1 of The F1rst Hero is here!
32 pgs./Teen/ FC $3.99

The bunnies are back! And when Phil and Tyrone stumble into a post-apocalyptic illegal cock-fighting ring they will need all the drug-fueled stupid they can muster to survive their latest off-color adventure! In the grand tradition of excessive Hollywood schlock comes… Itty Bitty Bunnies in Rainbow Pixie Candy Land : COCK FIGHT! Also available in a limited “movie poster” variant cover, limited to 2,000 copies.

Betrayed, bloody and mad as hell, it’s Jack’s turn to go on the hunt, sucking chest wound or no. But Jack hasn’t even met the man called Usurper face-to-face and he’s already fighting for his life. With both Jack and Ramona’s lives on the line, who’ll go down for the count?
32 pgs./ All Ages/ FC $3.99

Young Gavin Shaw is granted the power to do what local law enforcement and the
superhero community cannot–save his city from itself. As Midnight Tiger (because he can only patrol the city after midnight), Gavin begins his assault on the gangs and drug dealers running the streets of Apollo Bay an eventually ends up expanding his world in ways he never imagined.
128 pgs./ All Ages/ FC $14.99

Meet Laura and True – two bourbon-toasted gunslingers caught between hardcore scores and soul depraved rehab! Dirty, violent and simple, or so it seems… the pair’s desert road trip of carnage and courtship may just take a cosmic turn when a mysterious figure begins to tail them on their explosive journey.
Collects the entire explosive 3 issue grindhouse series.

The growing conflict between the KKK and the elusive beast comes to a head when
Jasper attends a party to see Zoe, only to reveal his transformation after getting beat up. With Jasper’s successful capture, the confrontation falls on Bill when the beast’s identity is finally revealed to the Klan. Featuring series covers by red-hot artist Riley Rossmo (Drumhellar)!