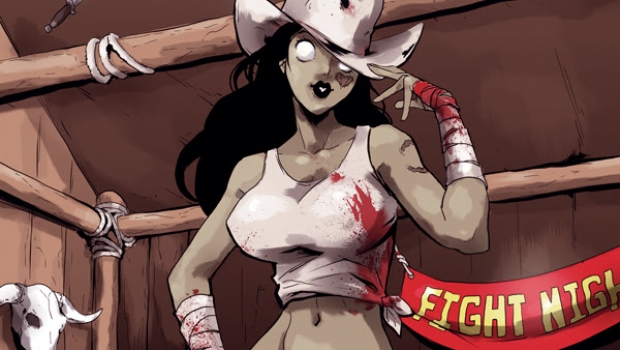 We at C4S love Zombie Tramp 🙂

When you’re the street walking dead, you never know what kind of situations you may find yourself in from town to town. This time Zombie Tramp may regret her choice of locals as she’s drawn into an underground fight club. Grab your spurs, it’s time for a honky-tonk beat down! Features a variant cover by Dan Mendoza (limited to 1500 copies) and a risqué variant cover (limited to 2000
copies).

Jack’s past meets his present, and his recently “upgraded” curse is put to the test as he and his allies are
caught on the wrong side of town. When an all-out attack threatens what matters most to Jack, can he
rise to the challenge?

The conclusion to Everything and Small Doses is here. The final battle with the time-jumping assassin
monkey Mister Everything is fought. The discovery of what he was after, and his secret past are revealed.
Dominika’s plans to find a portal come to fruition as our heroes, Gabe and Whispers, fight for their very
lives!
32 pgs. /Mature Readers / FC $3.99

Everyone who manifests superpowers goes insane and becomes a threat to society…
except for Jake Roth. When Jake manifests superpowers but somehow keeps his sanity, he
must decide whether or not to put himself at risk by using his new abilities to help people or do
nothing and save himself while innocent people around him get hurt. From war-torn Afghanistan
to the streets of South Philadelphia, it’s an all-out fight for survival for The F1rst Hero!
128 pgs ./Teen / FC $14.99

ROUND 2! Amarosa has survived her first trial but the next may be more
than she can handle. Amarosa will confront a fear she had lost but has regained in a
new fashion as she braves a fight against a colossal robot responsible for the
eradication of the human race.
32 pgs. /Teen / FC $3.99

When Nikola Tesla’s fiancée, Amelia Earhart, steals a dangerous prototype engine for a trans-Atlantic flight, Tesla seeks out the interdimensional expertise of HP Lovecraft to save her. Lovecraft, however, has problems of his own as he investigates the identity of Cthulhu’s Herald. Variant cover by Colin Dyer, limited to 1,500 copies!

HEROCATS OF STELLAR CITY #3
Writer(s): Kyle Puttkammer
Artist Name(s): Marcus Williams, Ryan Sellers, Omaka Schultz
Cover Artist(s): Marcus Williams
What does it really take to be a Hero Cat? Find out as Ace leads Cassiopeia through
some long overdue training. Will she survive the journey from civilian to soldier? Action Lab’s
newest hit prowls on!

Yuri is confronted by a past foe as Valentina and Lyana square off against a giant
centipede. Also in this issue: Lyana the Seeker journeys to the underwater wreck of a
grand skyship. When she arrives, she soon realizes there is more than treasure buried
there.

Why is a nun barging into a seedy Tokyo karaoke bar in the middle of the night to find a sleazy naked man smoking meth? Because that man is Jesus, and Sister Maria needs him to help her and Satan stop humanity’s mythological gods from f*cking up the Earth. Includes two limited variant covers limited to 1,500 copies each, and ask your local retailer if they will be offering one of our limited edition store exclusive mythological god covers.
32pgs. /Mature Readers / FC $3.99