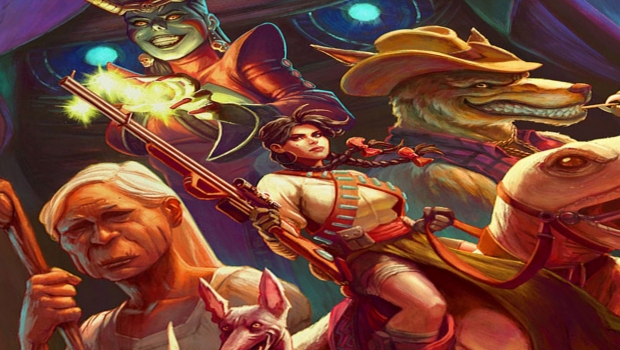 Set in a futuristic post-apocalyptic world, the story follows Adelita, a character based on the archetype of the female soldier in the Mexican Revolution. Heavily influenced by Mexican folklore, with elements and visual settings similar to Mad Max: The Road Warrior, 80’s action and martial art movies, and dystopian sci-fi with a fantasy aura reminiscent of Fables, making the series a perfect blend to appeal to a wide range of fans!

You’ll find anthropomorphic coyotes, witches, giant iguanas, robots, rotten flesh skeletons, and of course a plethora of Mexican characters! All packed into an action-adventure comic with a compelling story and a mystery that will unravel throughout the mini-series.

The story follows Adelita and her dog Xolotl as she tries to save a world ravaged by war, famine, and disease, all while trying to discover her true identity. Set in the year 3017, in post-apocalyptic Mexico, after centuries of war and destruction of the environment, empires have risen and fallen, and humanity is on the brink of extinction after a disease has turned many of its survivors into mindless rotten beings more machine than human. What little humans are left are scattered along the wastelands and struggle to survive under the constant menace of the vicious gangs commanded by Lord Mechanicus and Lady Masacres.

Check it out on KS right now!