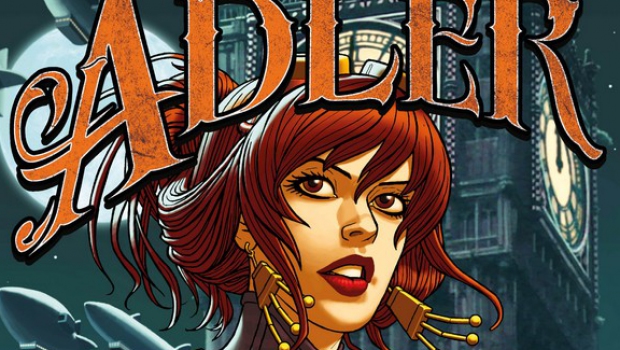 Artist Paul McCaffrey is an illustrator whose work has graced numerous publications, from magazines like Empire, NME and The Spectator, to educational materials from Collins, Heinemann, Macmillan and the Cambridge University Press. As a comics artist, his work has appeared in titles as various as Teenage Mutant Ninja Turtles, Zombies Versus Robots: Adventure, Violent! and DC’sMen of War. He has previously worked with Tidhar on the controversial ‘childrens’ book Going To The Moon.

Hi folks, Richard Boom here from Comicsforsinners! I am pleased to have a chance to get to know you better! Can you tell me a tad about yourself ?

I will go first 🙂 I am Richard Boom, and I love comics about strong women (and monsters). I hear the right term is philogynistic and that is how my website is set up! As was my previous Yahoo-group as well as my own collection of comics as well as the comicbooks I am publishing myself! I come from the Netherlands and never ever gonna leave here! I have 3 kids and been together with Ms Boom for 29 years and never ever gonna leave her !

Answer McCaffrey: I’m an illustrator with a background in children’s
educational books and editorial work. I’ve drawn a lot of stuff you’ll never
see for people you’ve never heard of!

Question Comics4Sinners: When starting up a story – be it written or drawing it- how do you yourself find yourself caught in this process, which I kinda think is magic?

Answer McCaffrey: totally agree with your point about the magical process.
The longer you live with these characters and their world, the more real it
all becomes… Maybe I should be worried about my mental health… For me,
it all starts with reading the script, picture research and lots of
scribbling, gradually building up a visual sense of these characters, their
personalities and their world.

Question C4S: When setting up a story and working together in this case with such a talented (yes I am biased cause I adore his style) as Paul… how does that work for you?

Answer McCaffrey: Lavie’s really easy to work with. His scripts are are
great. He may create many challenges for me but his storytelling is perfect!

Question C4S: When seeing a script, where do you go from that? Is it the layout, pencils, inks or is there more? Do you work panel per panel per page per page, or do you go all over, Paul?

Answer McCaffrey: I’ll rough out a single issue at once, mainly to get a
feel for panel layouts. Then, I try to block out a group of pages at a
time – even if only very loosely – just to get a feel for the flow of the
action, the movement of the characters, the position of the reader’s
viewpoint, making sure captions and dialogue can be positioned properly,
giving priority to the important panels. Then, I’ll work page by page.
There’s a lot of scribbling and re-drawing and abandoning things and
starting again from scratch. Eventually, I’ll have rough pencils, which I’ll
tighten up with a fineliner. I’ll scan the finished page of line art and
colour it in Photoshop. Then I’ll see all the things I got wrong…

Question C4S: Can I ask you for personal inspirations? Who are yours? I just have to ask: Art Adams and the inking of Frank Cho, sprinkled with a touch of Glenn Fabry?

Question C4S: How did you get into comics? And what attracts you in them?

Answer McCaffrey: I’ve been a comic book fan since before I could read but
I’ve no idea exactly how that started. I was mainly drawn to American
comics, picking up whatever was available in the local newsagent’s shop, as
well as British reprints of US strips. Despite this, I never really felt
confident about actually drawing them. I always thought strips looked like a
lot of hard work. Now I know that for a fact! The comic book is a fantastic
story-telling medium, though, with so much unexplored potential… and I
have so much still to learn.

Question C4S: ADLER is a story that feels unique, despite being inspired by some classical characters. How did you get these characters together, other then either hard work or a delirious dream?

Answer McCaffrey: Lavie tells me what to draw and I draw it!

Question C4S: Who is your favorite character in ADLER and why?

Answer McCaffrey: My favourite character tended to be whoever I was drawing
at the time. I liked them all, heroes and villains both. Even though the
title of the book is ADLER, it felt like more of an ensemble piece, for me.

Question C4S: ADLER is more then just action-adventure in a steampunk fashion for me as it also feels a setup for more… There are touches of worldbuilding, flashes of women-rights/feminism and smidgens of genres ranging from fantasy to scify. I feel ADLER might be a mere first step. Am I right, or am I just way to drooly for more?

Answer McCaffrey: Well, I certainly want to see more of Irene and her world
and I’m really pleased you do, too.

Question C4S: What is a future dreamproject?

Answer McCaffrey: A new series with Lavie, a couple of book covers, an
educational comic about Scott’s failed expedition to the Antarctic.

Question C4S: Geek/Nerd-alert… do you collect comics or statues or books (or…??) yourself ?

Answer McCaffrey: Yes, to all the above! I’m a total geek. Behind me, for
instance, there are statues of Luke Skywalker and Black Bolt. To my left,
there’s an 18″ Hellboy figure. I think I was infected with the collector bug
at a very, very early age and I’ve never quite shaken it.

Question C4S: Do you have a real workdesk and if so, can you show me a picture?

Answer McCaffrey: No! It’s a mess! Pens and pencils all over the place,
notebooks and lists, with a couple of piles of audiobooks (Kim Newman and
Peter Straub, right now) and CDs (Tapeworms, Aimee Mann, Tennis, Orwell, New
Order, Husker Du, 10CC, Tahiti 80, Tallies and Help Stamp Out Loneliness, at
the moment).

Question C4S: I thank you for the look into your life, and hope I did not embarrass you too much!

Not at all! Thanks for taking an interest in us and our
little book.