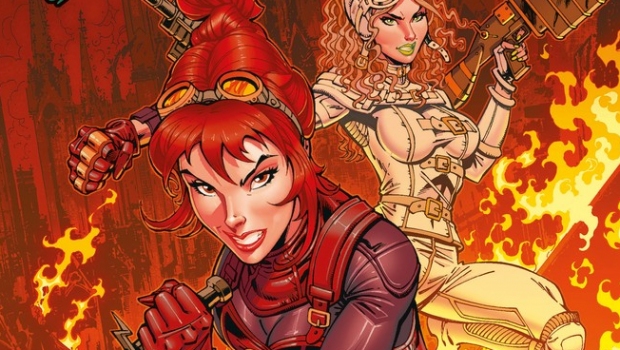 Artist Paul McCaffrey is an illustrator whose work has graced numerous publications, from magazines like Empire, NME and The Spectator, to educational materials from Collins, Heinemann, Macmillan and the Cambridge University Press. As a comics artist, his work has appeared in titles as various as Teenage Mutant Ninja Turtles, Zombies Versus Robots: Adventure, Violent! and DC’sMen of War. He has previously worked with Tidhar on the controversial ‘childrens’ book Going To The Moon.

Hi folks, Richard Boom here from Comicsforsinners! I am pleased to have a chance to get to know you better!

Question Comics4Sinners: Can you tell me a tad about yourself? 🙂

Lavie Tidhar: Well, I’m just the guy who wrote Adler! I’m mostly a novelist – Osama, A Man Lies Dreaming, Central Station, By Force Alone, etc. But doing comics is much more fun! I’m originally from Israel, and currently live in London, where I get to make stuff up for a living, which is nice.

Question Comics4Sinners: When starting up a story how do you yourself find yourself caught in this process, which I kinda think is magic?

Lavie Tidhar: Starting is fun – it’s getting through (whether a 110pp graphic novel or a 100,000 word book) that’s the hard part! One reason I like writing short stories is that I get to do more things more quickly – when you have so many ideas it’s hard if you have to pick one and spend the next year just working on that! So I do tend to have several things I’m working on at the same time, so if I get bored I switch for a bit. I got into making small mobile games recently.

Question C4S: Is writing all about research, knowledge, a personal drive/focus or is it all about finding your muse?

Lavie: Well, it’s easier than working for a living… I do like the research part – I think the more you know of something the less you need to make up, and reality is always weirder. If you look at Paul’s art for the Egyptian Hall in Adler, for instance. Not only was it a real place but the characters we only get to see in the background, the people who had to work in the Victorian freak shows due to various disabilities – they were all real. I wrote them in, and Paul actually and painstakingly drew them all – they’re not part of the story as such and don’t even speak! But it’s amazing to see them come to life there. So that’s research, detail – and a little satisfaction in bringing these forgotten people back to life, if only for a moment (and even if no one will ever notice!).

Question C4S: When setting up a story and working together in this case with such a talented (yes I am biased cause I adore his style) as Paul… how does that work for you?

Lavie Tidhar: Well, I knew him before he was famous… It’s important to work with an artist you trust, or write for the artist because you know they will see it the way you do. So when I write, I try to write for Paul but also with the knowledge that he will make it work, and my job (other than, you know, story and dialogue and so on) is almost just to help with some details, to suggest what can be seen in the frame that isn’t obvious. And just from time to time to tell him a particular page isn’t working – go do it again, Paul! Ha!

Question C4S: How do you set up a story like Adler? It is filled with so many strong and unique characters.

Lavie: I’m not sure I know how to answer that! The characters in a way all existed already, which is part of the fun, but of course there’s not much similarity to the “real” ones – they were just an easy shorthand. And they’re all very confident and competent – all the things I’m not!

Question C4S: When seeing a script, where do you go from that? Is it the layout, pencils, inks or is there more? Do you work panel per panel per page per page, or do you go all over, Paul?

Answer Tidhar: I can’t draw, though I’m writing a short animated series at the moment, and in both cases (comics or animations) I do find interacting with the artist works to try and get early visuals and a “feel” for it, which helps inform the writing. So we do run things back and forth, especially in the early stages, try to settle on the right look and feel of the characters and the world and so on.

Question C4S: Can I ask you for personal inspirations? Who are yours?

Lavie: In this case, obviously, a lot of the original Victorian works! They were so much fun, from Conan Doyle to even, say Dickens’ Great Expectations, they’re so grimy and full of this underworld life, just really a reminder of how awful Victorian London really was. And they had to be exciting, they had to be filled with adventure and murder and chases – people really underestimate the Victorian writers because they’re “classics” now, but they were the popular fiction of their day! So that’s an inspiration here, as well as people like Tim Powers or Kim Newman who took that on (with books like The Anubis Gates or Anno Dracula) and remade the Victorians again with alternate history, with fantasy.

Question C4S:  How did you get into comics? And what attracts you in them?

Answer Tidhar: I kind of fell into it by accident! I was contributing fiction to a very nice small press anthology magazine that did both, and the editor asked if I wanted to write some comics. So I had to learn as I went along! Then he put me together with Paul, and we ended up doing a book we both still really love, called Going To The Moon, so then we were casting about to work on something else together… And then it all fell into place relatively painlessly – a case of the right project at the right time. I enjoy it a lot! I love the formal challenge of writing in comics form, and I love that it leads to beautiful art (that I don’t even have to do myself).

Question C4S: ADLER is a story that feels unique, despite being inspired by some classical characters. How did you get these characters together, other then either hard work or a delirious dream?

Lavie: I guess the short answer is, you know, hard work! It was a bit of a convoluted process, in that I wrote the initial outline of what would become Adler in about two months when I was sort of stuck on other stuff, and I wanted to write something very action-y and very fun for myself. And then it just sat there. And then when it came to doing the comics it was taking that initial stuff and thinking visually about it. So the first part I guess was, yeah, more being in the moment with the characters and the action and just letting it flow, the second is more careful, more work-like. A bit of both!

Question C4S: Who is your favorite character in ADLER and why?

Lavie: Roylott, the poisoner. He’s a minor character from the Holmesian canon (the villain of “The Adventure of the Speckled Band”) and I just had a lot of fun putting him in and giving him a couple of fun lines. And he survives to the end!

Question C4S: ADLER is more than just action-adventure in a steampunk fashion for me as it also feels a setup for more… There are touches of worldbuilding, flashes of women-rights/feminism and smidgens of genres ranging from fantasy to scify. I feel ADLER might be a mere first step. Am I right, or am I just way to drooly for more?

Tidhar: Who knows! I think you always want to give the feeling of a wider world beyond the story itself, so that’s nice to hear. Will there be more Adler? Well, for one, it’s currently being developed for… well, something! So that’s one avenue where we might see more of it. And Paul had me do some thinking of where the story goes next. It would be fun to write more if the opportunity arises!

Question C4S: What is a future dreamproject?

Lavie: We’re working on another very cool comic together right now, so I’m happy. And I would like to find some way to bring back Paul and mine’s Going To The Moon into print, since I still love that book. That’s on my shopping list, as it were. I don’t really have dream projects because if there’s something I want to do, I just do it.

Lavie: About a ton of stuff! I have two novels out this year, The Hood in the UK, which is sort of a “narcotic reweirding” of Robin Hood, and “The Escapement” in the US, which is a surrealist sort of Circus Western, erm, think Sergio Leone by way of Dali and Dr Seuss. Plus “The Lunacy Commission”, which is more for my own fun, a collection of my “Adolf Hitler: Private Eye” stories, and smaller books like The Big Blind, which is a book about a young nun who enters a poker tournament. Plus my giant anthology, The Best of World SF, which has just come out! It’s probably a bit too much, to be honest. And I’m busy on a bunch of things, including a giant crime novel and the animated TV show I mentioned. And I recently got into making mobile games like I mentioned, just for fun. Who needs sleep, right?


Question C4S: Geek/Nerd-alert… do you collect comics or statues or books (or…??) yourself?

Lavie: I used to collect more than I do now – I don’t have the space! I don’t collect comics much – mostly signed first issues of people I know – I have the Issue #1 Anno Dracula signed by Paul and Kim Newman! An Issue #1 of Lauren Beukes’ The Hidden Kingdom. Stuff like that. I picked up some cool Japanese art when I was a guest in Japan a couple of years back – some original pieces and some signed prints, including some of my Japanese book covers. Those are amazing! Mostly I collect – or collected – books. I like signed limited editions and proofs, and I also collect fairly obscure stuff like Hebrew pulp fiction. Very rare, if not necessarily valuable. I collected books about performance magic for a while, but the only thing left from that is a copy of the 1937 Encyclopedia of Cigarette Tricks. I mean, how can you resist! But most of my books are scattered across continents and I have no real idea what I have anymore…

Question C4S: Do you have a workdesk of sorts?

Lavie: I had various desks at various points but moving around so much, I mostly write on the sofa these days! I think my favourite was when I was living in a bamboo hut on an island in the South Pacific for a year – I had a little table and a nice view of the volcano, but no electricity!

Question C4S: I thank you for the look into your lives, and hope I did not embarrass you too much!

Lavie: Thanks for having us!