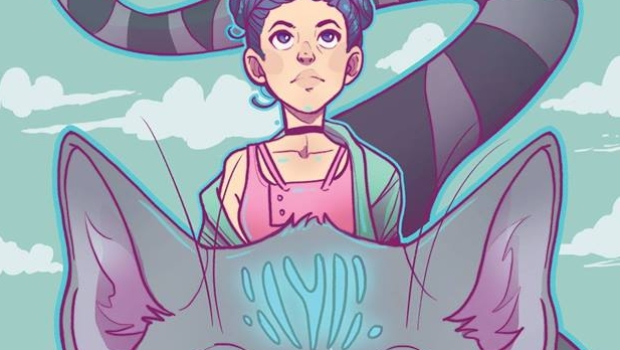 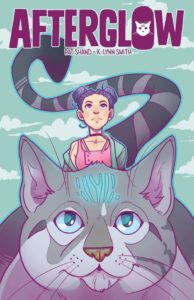 AFTERGLOW is a beautifully illustrated, full-color graphic novel about what happens after the world ends…and how one girl and her giant radioactive cat must prevent it from ending again. Creator/writer Pat Shand says:

“100 years ago, an event called The Glowing devastated 80% of the population, leaving the survivors with an Earth that has been changed. Water is radioactive, animals have mutated, and the world has been painted with beautiful, dangerous, glowing color. Most of the remaining society has broken into villages in attempt to rebuild the world they lost, but this mysterious girl, Lacey, and her giant cat have embraced this wild new world. Lacey has always been an outsider, but when she discovers her late mother’s journal that foretells another apocalyptic event, Lacey and her giant, radioactive cat AFTER set forth on a journey to spread the word.”

Artist K. Lynn Smith continues: “I am super stoked to be working on this project… It’s going to be magical, it’s going to be heartwarming, and it also has a massive mutant cat. I mean, what more could you want?”

In addition to the graphic novel, Space Between Entertainment is offering merchandise including a enamel pins, buttons, bookmark, a signed bookplate, bumper stickers, exclusive wood burned art pieces, the opportunity to be drawn into the book, art commissions, and more.