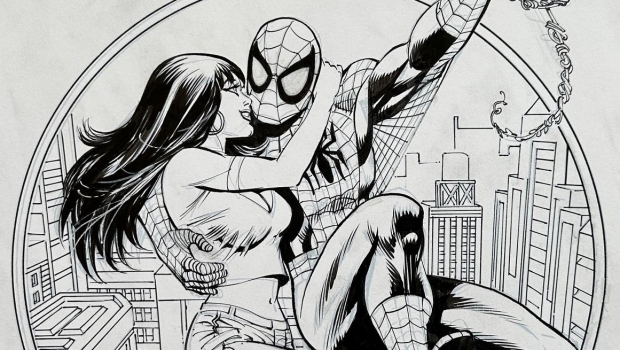 The non-profit Inkwell Awards, devoted to promoting the art of comic book inking, has announced its second Joe  Sinnott Tribute Challenge Spotlight, renamed the Legacy Challenge. The event features artist Alex Saviuk‘s exclusive pencil art of Marvel’s Spider-Man & MJ which was scanned and sent to a variety of ink artists to embellish.

The event was launched in 2021 to commemorate the life and career of the award-winning, multi-decade ink artist Joe Sinnott, who passed away in 2020, and the annual inking event that bore his name since 2010. Inkwell Awards’ founder, Bob Almond, explains:

“Our previous Sinnott Inking Challenges were major events for us and our supporters. Joe would give us a tightly and/or loosely pencilled drawing of a popular character. Then ink artists of various experience levels would complete the scanned art in black and white, each bringing his or her own style to the piece. Fans are then able to see the difference in the pencilled and inked versions to better understand how much inkers contribute to the artform.”

The tribute furthers the inking advocacy’s dual mission of promoting the artform and educating the public. Each inked page will be signed by Saviuk and the inker. All pages, plus a certificate of authenticity signed and numbered by Almond, will then be auctioned off as a fundraiser in biweekly waves beginning this spring of 2023.

Sinnott’s son Mark shares, “On behalf of the Inkwell Awards and the entire Sinnott family I would like to thank you for taking part in this year’s Joe Sinnott Legacy Inking Challenge. As many of you know in years past Joe always enjoyed seeing the different inked renditions of his pencils to make the Joe Sinnott Inking Challenge such a success.  It is with great pleasure to me that this year’s Challenge is featuring my dad’s longtime penciller on the Sunday Spider-man strip, Alex Saviuk. Joe had the pleasure to work with Alex over the span of 22 years on that strip, far longer than Joe had worked with anyone else. We are so glad that he agreed to be a part of this and keep Joe’s legacy going. Thank you Alex, and thank you, the inkers who will be taking part in this challenge. I look forward to seeing your finished work. I know my dad would be proud as well.”

“On behalf of the Inkwells,” added Almond, “our sincerest thanks to Mark, Alex, all of the many dozens of participating inkers, and all involved for their cooperation, support of our program, and appreciation of ink artists.”

Information about the upcoming fundraising auctions can be found on the Inkwell’s website.