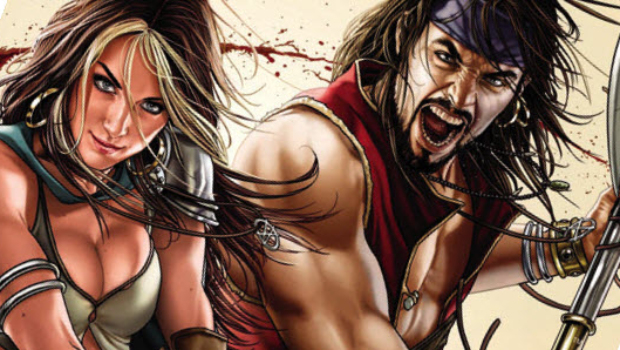 Next July is an Amigo-month with a summer breeze attached! Scorching hot titles from the wastelands!

We have Sword & Sorcery done right with a new Rogues! series debuting, a new issue of the scify-horror title Titan as well as Nancy In Hell. We have a re-solicit of Apocalypse Girl and we have a new Sallybooks-imprint title called The Astronaut.
And if that is not enough, we offer the first Rogues! in TPB format in which superstar artist Juan José Ryp will show you just how Cursed messing with a Chicken is!!

You do remember NANCY, who is stranded in a vast wasteland, looking to survive a demon chase while her Lucifer is calling for her! After 2 miniseries and a crossover with Erik Larsen’s Savage Dragon apparently the story is long but over, just prior to her TV-debut! You can check out the pilot at IMDB, which was funded via Kickstarter.

Amigo Comics’ new imprint -Sallybooks- is intended for children and young teens, and with the Astronaut title we reach for the stars!

Bram and Weasel are back… and they screwed it up again! After a long journey, our rogues are bringing a strange souvenir: The Eye of Byatis, which they are trying to sell before it rots. Or before it brings a certain doom upon the city of Gerada… The Great Old Ones!

While still being chased by infernal agents, Nancy finds companions on the long road. The “Lucifer’s Lions” biker gang and their base of operations, the bar run by The Widow. But what catches her attention is a dark and rickety structure, almost forgotten. The Church that lasts in Hell and the secret that hides.

Metanoia: Senator Levy, Titan’s uncle wants control of her cosmic power. To get it he’s willing to coerce obedience; blow up her home, murder her mother and lobotomise her father; his own brother. But Titan is the Mother of Monsters; a Cosmic God, her nature wrathful, and she bows to no one.

Rogues! TP 1 The curse of the chicken and other stories

From the poultry-ish and terrible consequences derived from the kidnapping of a wizard’s daughter, to the incursions into forgotten cemeteries to summon a lich, as well as being chased by bounty hunters, or being thrown into a prison and even guiding some assassins through underground tunnels in a shady mission… Being a rogue isn’t an easy job!

This volume contains issues 1 to 6 of Volume 1 of ROGUES! created by EL TORRES and JUAN JOSÉ RYP!

Young Frankie has been kidnapped by the Demon Dukes. Metis, along with the survivor Ollie and Sil the Angel, are on their way to his rescue, running through a country teeming with monsters. Maybe… that isn’t a good time to be fooling around with kisses, Metis. And besides, who’s really Mom?

Author: Carlos X. Díaz
Artist: Guillermo Monje
He had a fascination with stars since he had use of reason. His passion will make him start an incredible voyage full of surprises and discoveries, even about himself.

This work is focused on children with special educational needs, mainly those with Autism Spectrum Disorder (ASD), although it can also be used with chil-dren with similar problems in communication and/or development.