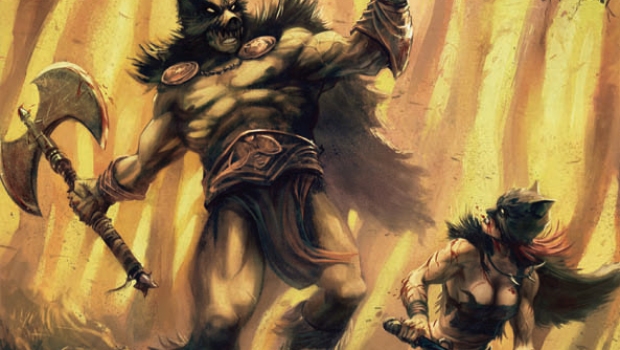 Three spotlighted books for you, from your amigos! The action and horror that awaits you in our upcoming titles will keep you all pins and needles. From the cold space, a spaceship’s crew will meet a fate worse than death in the sci-fi/horror hit The Last Hunt. And from the cold North comes the one who teaches us to fight, to protect, to survive: The Ghost Wolf.
But also don’t miss the horror story by excellence, previously published by Image Comics. Drums. Santeria and zombies, now resolicited for your reading pleasure. That one isn’t cold, but there’s a lot of rain in it.

Ghost Wolf: The Horde of Fangs #2

The Horde of Fangs scour the Northlands for rebels and southerners. They know they are in the right path and the victory is near, for the Ghost Wolf is by their side! But Mara, the last Ghost Wolf stands in their way… until she realizes she must face his own guardian spirit!

The acclaimed miniseries Ghost Wolf from award-winner writer El Torres thunders its way to comic shops with a new story arc! A bloody and vengeful epic saga that all sword-and-sorcery aficionados must read, with the spectacular art by new talent JuanFra MB!

A routine run to the dry wasteland known as Earth goes bad when the cargo ship Ragzon, breaks down. But that’s nothing compared to the nightmare its crew faces when they help out a trio of scientists on their last legs.

No good deed goes unpunished in “The Last Hunt”!

This scifi/horror story has earned this month “Spotlight On” from Previews!

FBI agent Martin Irons is tasked to investigate the bizarre deaths at a Santeria ritual in the heart of Florida. As a foreboding storm swarms over the city, one of the victims comes back as a zombie and puts Irons’ case in a whole new category. With the Santerian drums beating as the thunder rolls, Irons and his team look to find answers for the deaths, while also trying to prevent more tragedy!

“The horror is excellent as well with heightened tension through use of environment (i.e. storms) and mystery. Recently, there has been a renaissance of scares in the medium and this has the potential grab a piece of that.” —Eric Whitman, Daily Blam