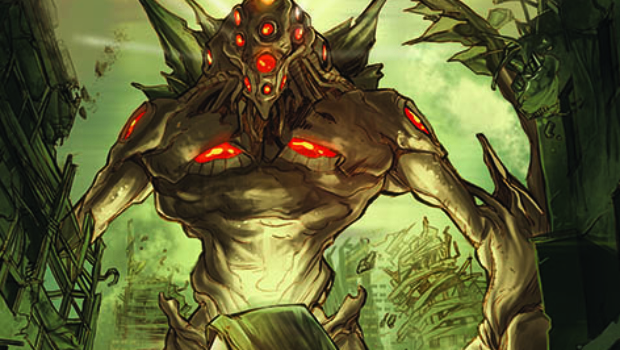 Do you love monsters? BIG Monsters? HUGE Monsters? Gigantic Monsters? Then Amigo Comics is proud to present GARGANTUAN, about Sarah and her quest for the cause of the devastation in a dystopian California, filled with Gargantuan beings.

Also, Straitjacket follows its way to madness and world-ending insanity; plus all the white-knuckle, pulp-action of Nasty Pills and at last, the incredible Titan: Mother of Monsters GN!

Don’t forget to ask your LCS for our books, or check our online store! Don’t miss them, our print runs are small!

Sarah is struggling her way in a world ruled by a mad giant!
Sarah Lozen, a Native American US Marshal, now lives in a dystopian California. The criminal she is in pursuit of Crius Warner is the cause of the devastation. Though Sarah does not believe it, she is the spirit guardian not only for her people but the alien beings: Gargantuan, whose true natures are the “protectors or destroyers” of worlds.

“With the words of Colleen Douglas, the art by Luis Czerniawski, the covers by Hugo Petrus and the lettering by Ferran Delgado, this story is back bigger than ever!” -El Torres

The two Wagner brothers are trapped in different nightmares. For Alexander, in the body of her sister, it’s the truth about the cult and the charismatic leaders. For Alexandra, the entity in the Otherside calling himself the Third Brother. Is he real, or just a dissociative personality of one of the Wagners. And from whom?

The Straitjacket series has been optioned for a TV Series! More info soon! A trip to the dark side of the mind and reality, lead by the Wagner brothers. One is dead, the other is insane… or perhaps too sane.

And we even had a short film, directed by upcoming star Iván Mulero with some of the best Spanish actors ever! Check the trailer (sorry, just in Spanish):

An issue #0 where the end of the world begins!
They were the Giants that once ruled the Earth. Now they only exist in nightmares as Marshall Sarah Lozen has. And she doesn’t know that her pursuit of the criminal rockstar Crius will end with the rise of The Gargantuan – and the end of the life on Earth as we know it!

“Gargantuan was one of the first projects we had in Amigo Comics, and sadly, the first one we had to discontinue”, says creator El Torres. “But now, with the words of Colleen Douglas, the art by Luis Czerniawski, the covers by Hugo Petrus and the lettering by Ferran Delgado, this story is back bigger than ever!”

“But we had some sad feelings about all the wonderful work that Rubén Rojas did for the series that was going to be discarded… So we arranged an issue #0 with all of it, this one, to be offered with a reduced price”, continues El Torres. “So, this is your chance to start with the Gargantuan series. We hope you like this story with giant monsters and a brave warrior woman!”.

May Campbell is falling into a spiral of self-destruction and bloody rampage against the mobsters who killed her lover. They were just two women in love. Now, one of them is an insane, blood-thirsty, killing machine. Read the conclusion of this white-knuckle action book by indie creator Massacre!

The indie artist behind the fan-favorites Sidney Hammer and Hidden Blood delivers another crazy pulp-action story with guns, sex and mayhem!

The Elder Gods are not as you think!

They only have one rule: “None Shall Be Greater Than Another.” Titan is an astronaut and the reincarnation of The Mother of Monsters. Her uncle wants control of her cosmic power. To get it he will blow up her home, murder her mother, and lobotomize her father… and yet, he is just a pawn.

The fan-favorite series featuring the Lovecraftian Elder beings… with a sci-fi twist collected at last!