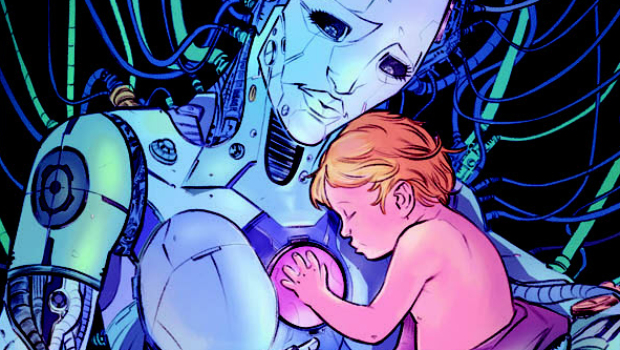 This October the Spanish we call Amigo, will lead the battle of the remainder of humanity: pleasure versus regeneration in a brand new series, called The Blackening!

And we say YES Victorian Age Horror with the Spanish Master Of Horror in Phantasmagoria!

And YES YES YES we will serve it up with a side-dish of Sword & Sorcery done right with Rogues! Bram and Weasel meet up with Mythos.

We also have the TPB of Apocalypse Girl, which collects the hard-to-find mini-series!

And we have a new Sallybooks-imprint title called COCO WHERE ARE YOU?.

After The Plague, Humankind was forced to regenerate itself, replacing the bodies with sophisticated machines. The new technology that saved humans from extinction seems to have nothing against their innate cruelty. Tony is one of the humans left that still enjoy feeling the simple pleasures of life… but everything goes to hell when his companion dies and his daughter is abducted.

It’s the Rogues vs The Mythos! The island of Rlyeh has emerged from the depths of the ocean. The expedition commanded by Weasel and Bram has the mission of preventing the imminent tentacular apocalypse… But they did not count on the betrayal of the possessed scholar Echpiel!

From the Eisner-nominated creator El Torres comes the horror in the Victorian Age!

Horror runs through the sewers of the Victorian London! The escaped Drood is looking for allies in his war against Professor Hawke. Inspector Forrester continues his inquiries into the mass murder. Meanwhile, the old magician and his assistant try to find some trace of the missing Miss Grantley…. If the Intruders from the Other Side don’t kill them first!

Most common teenage issues are self-esteem, stress and pressure, dating, appearance and those worries and teen angst that won’t go away. Metis is 16, has all these problems and more. Because, on top of that, the End of the World happened and she has to cope with bloodthirsty demons and a 4,000-years old, critical, undead mom!
This volume compiles the entire hard-to-find miniseries with many extras!

Coco, Where Are You?

I’m looking for my dog Coco. I lost him in the park, while we were going for a walk. Coco is neither long nor boring, neither pink nor naughty, neither small nor cowardly… Can you help me to look for him?