C4S with their pre-order info on ..." /> Amigo Comics Solicitations For Feb 2014 – Comics for Sinners
Solicits 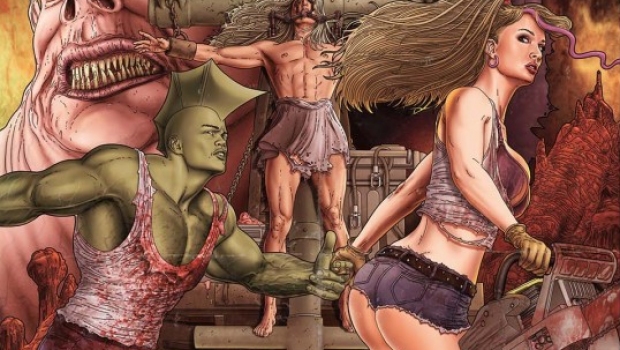 Amigo Comics has provided C4S with their pre-order info on all titles shipping around February 2014.

Expect the impossible! Amigo is proud to announce a crossover event between the two main characters… and two publishing houses. Nancy in Hell visits Amigo Comics with the help of the great creation by Erik Larsen…The Savage Dragon! This great one-shot have been chosen as Staff Pick in December Previews!

Also, Lunita and the second volume of Rogues! come to the end of their miniseries. Three crowning jewels for Amigo in February!

Nancy in Hell: A Dragon in Hell

Some people meet in the most strange places. For the very first time, Nancy In Hell has a crossover, and it is with one of the most beloved, long-running independent Image Comics original characters: The Savage Dragon.

But strangely, this very first crossover is not at Image Comics where they were born, but at Amigo Comics. El Torres is the creator of ” Nancy In Hell “, and wanted to write a one-shot that would attract some attention over to Amigo Comics. Luckily the folks at Image Comics allowed him to do it with Nancy In Hell … and maestro Erik Larsen gave permission to use Malcolm Dragon.

Erik Larsen has always supported the independent creation of comics in many ways. He allowed the creators of “Nancy in Hell” to use the Savage Dragon as special guest star in the book. But make no mistake, this is a Nancy In Hell book, so there are plenty of demons, blood splashes and brain-dead zombies being ripped apart by a chainsaw, following the “B-movie” style featured in the Image Comics ” Nancy In Hell ” saga.

Nancy in hell: A Dragon in Hell is a one-shot, written by El Torres and with art by Enrique Lorenzana, who already worked together on the Image Comics miniseries Comics ” Nancy In Hell” and “Nancy In Hell On Earth”. So grease your chainsaws and prepare your fists… Hell is going to become even a crazier place!

Lolita Aldea’s fantastic run on Rogues concludes here! If you haven’t taken a look at her amazing artwork, do it NOW before it’s too late!

And the time comes when heroes return to their homes. They go back to normality, and carry on with their boring lives. But that’s not the case of Bram and Weasel, because they live in Gerada, City of Thieves… and also because Hakon the Deathless isn’t… well, dead.

The tale that redefined Bram and Weasel’s relationship, in the series that mixes humor, action, fantasy, undead vikings and, for this time only, even dragons!

This is the final chapter of Lunita!

The plan has gone terribly wrong, and the Mermaids have declared war upon Mankind. Lunita must face them and stop the massacre… even by paying with her own life if needed!

The fantastic run of the daughter of the Moon concludes with a shocking finale!

The adventure -located in the mythical Spain, with monsters, politics, witches and cats- comes to a startling conclusion. The artwork by Sergi San Julian and the script by Xavier Morell have received great praises!

“The art that I’ve seen of these books are really incredible and some of the best cartooning I’ve seen. I don’t know why I’ve not seen or heard of Amigo until recently, but I’m making a point of picking up some back issues and getting more familiar with their library of comics. I would suggest you do the same. “