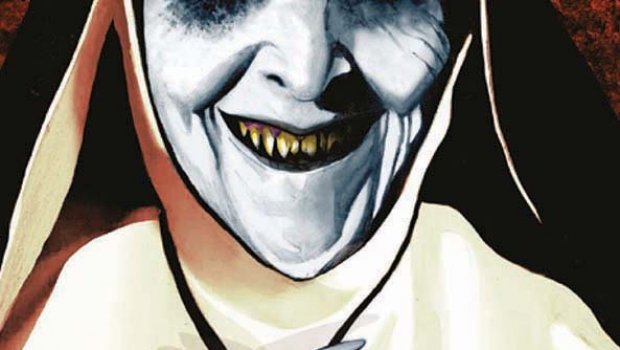 Just one book this month? Well, it’s one hell of a book! And we mean Hell. It’s Roman Ritual, by El Torres and Jaime Martínez. An acclaimed but almost impossible to find miniseries, now compiled and with extra pages of sketches and illustrations.

A murder involving a cardinal is shaking the Vatican, so cruel and vicious that goes far beyond any crime and conspiracy that may have taken place in the Catholic Church before. Self-exiled priest John Brennan, a bold, troubled exorcist is summoned to Rome. Because there is an ancient evil spreading within the halls of the Holy See itself!

Story by: El Torres
Art by: Guillermo Sanna
Writer: El Torres
Artist: Jaime Martínez
Color: Sandra Molina
Self-exiled priest John Brennan, a troubled exorcist, is summoned to Rome to stop an ancient evil spreading within the Holy See itself. A revolutionary story about possessions and exorcisms, with ties to the church’s shady past, and a man, almost helpless and alone before the evil that would bring the end of the catholic church.This volume collects the critically acclaimed four-issue horror miniseries ROMAN RITUAL, published by AMIGO COMICS.

“Roman Ritual has excellent pacing that uncomfortably keeps you mesmerized and eagerly turning the page. ”
–Mike Peluso, ComicMonsters“I love horror comics. They are primarily what I collect. The more horrific the better. I picked up one this week that was incredible. Roman Ritual.”
-Comics Heating Up“Infused with human drama and the supernatural element, Roman Ritual is the best book you aren’t reading!”
-Steven Leitman, IndieComix“By the time you get to this end of this book, you will be wanting more. If you are a fan of the supernatural and horror genres, you will enjoy this book. Help support the suppression of evil and put this book on your pull list.”
-Eternal Rage