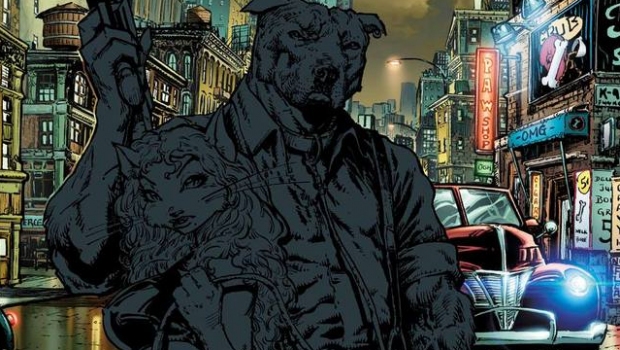 Comic veteran Mario “OMG” Gully launched his latest comic book on Kickstarter this week. Written and illustrated by Gully and colored by Thomas Mason, Dirty Bones is the story of a dog named Rover who’s caught up a world of organized crime and forbidden love. With incentives including signed printed copies of the comic book, posters and commissioned art, Gully aims to raise $50,000 to complete the artwork and get issue #1 on the stands.

“This is my first big project since I created ANT. I’m a much better artist and writer than I was a few years ago, and Thomas is just killing on the colors,” says Gully. “ANT was my Off the Wall album. Dirty Bones is my Thriller.”

At the center of this epic tale is Rover – an ex-gangster who gave up his life on the streets to embark on a quest of self discovery while standing against the segregation between the mutts and the pedigrees. Rover quickly finds out that life in the city has changed as Dirty, the notorious “Big Dawg”, has taken control of New Bark City by force, while fighting a vicious turf war with Madam Kitty for ultimate power.

“We’ve put a lot of energy into creating the best possible Dirty Bones preview and incentives for fans, collectors and retailers,” says Gully. “I can honestly say this is the best project I have ever been a part of.”

To view his Kickstarter video and back the project, visit https://www.kickstarter.com/projects/754131023/dirty-bones or click http://kck.st/1fiVaWN