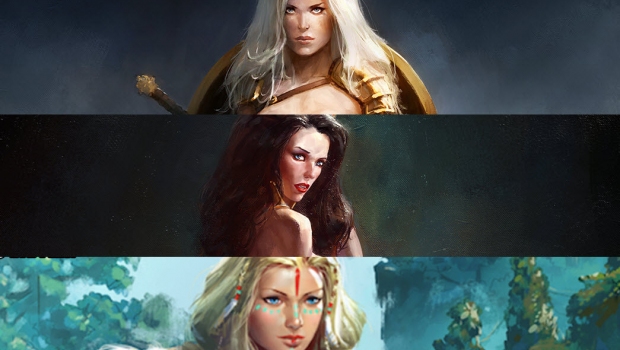 In the years after the third Arkhorian War, hordes of reavers, pirates and mercenaries roamed the world, their swords serving no cause but themselves or the highest bidder. Across those bloodstained lands rode Arhian, proud, fierce, her guile and wit as cutting as her blade. Storming through an age without heroes, she claimed it for hers, and cleaved her way into legend.

Bounty-hunting mercenary, Arhian cuts her way through an ancient world of horrors and cruelty, taking on scumof every ilk with deadly steel, deadliercharm and bold, sassy attitude. Taking the Weird Tales brand of hard-edged pulp fantasy and coupling it with the wry humor and cool brutality of an Eastwood or Tarantino western, this ARH ComiX offering is the one to watch for all lovers of great adventure.

The 5-issue series not only introduces the sexiest, toughest, most indomitable heroine you’ve seen in ages, but also doubles as your first look into the epic, conflict-forged age of the Arkhorian Wars, set to be further explored into more pulse-pounding sagas to follow, including AGE OF ARHIAN, a 15 chapter saga that reveals ARHIAN’s origins and pivotal involvement in the third and most brutal ARKHORIAN WAR.

“You will fall in lust with Arhian and will be in awe of her,” say Radjah and Kawa, who also chronicle ARH’s QUEEN OF VAMPIRES and SHA-RYN series. “She is a feisty, no-nonsense, independent woman you wouldn’t want to cross, and her world and story will prove just as captivating as she is. Make no mistake, this is only the beginning.”

Arhian’s universe is so vast that it bursts through several ARH ComiX licenses connecting the ARKHORIAN WARS saga to ARHIAN, SHA-RYN, RESALLA and even the upcoming TWIN MERMAIDS comics. All set in the same era and world.

You can see the Statue here: https://arhstudioscollectibles.com/shop/arhian-city-of-horrors-ex-2/

In the wake of ARHIAN: HEAD HUNTRESS, the gritty,thrilling fantasy adventure from ARH ComiX, storytellers ARAHOM RADJAH and ABRAHAM KAWA return to the epic age of the Arkhorian Wars with a brand new tale starring Arhian’s wild & younger sister, Sha-Ryn.
Joined by artist supreme NIKOS KOUTSIS, the creative team will be taking readers for the ride of their lives – and they’re taking no prisoners!

Set seven years before the events of ARHIAN: HEAD HUNTRESS, at the height of the third Arkhorian War, the new series sees Mazkaran – the island haven of the Amazons – being invaded by unstoppable Arkhorian forces. It’s in this desperate moment, with her sister away and her people facing imminent death and destruction, that young Sha-Ryn must forge herself into a heroine – or die trying.

“This is a wholly different animal then ARHIAN,” Radjah and Kawa assure us. “Sure, it’s got tremendous fighting, great storytelling, and a beguiling heroine – ARH’s trademarks – but just as Sha-Ryn is young and bursting with enthusiasm here, this tale is meant to highlight the fun we and our readers can have in such a world. We got everything on this island: Amazons, jungle action, great beasts that time has forgotten, mayhem, cliffhangers… This is high adventure and action of a classic caliber with an ARH twist: if your jaw doesn’t drop on every splash page, folks… you should check your pulse!”

You can see how the Statue will look here: https://arhstudioscollectibles.com/product-category/statues/

Check out our new statues: https://www.facebook.com/ARHStudiosfans/