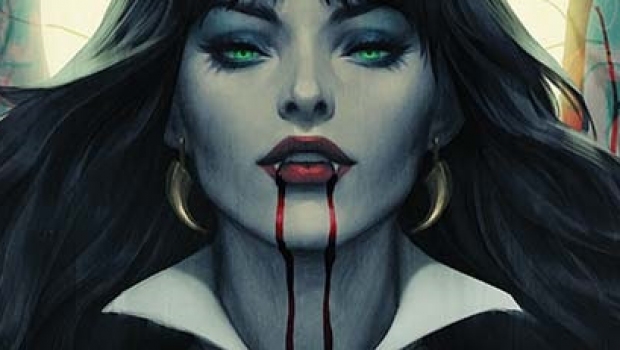 One of the spotlights of our new Halloween themed Indiegogo campaign is the beautiful Vampirella bust statue based on superstar artist Stanley “Artgerm” Lau’s fan-favorite cover to Vampirella #2. Fans went absolutely wild when we revealed this beautiful cover for the second issue of our hotly anticipated 50th-anniversary relaunch of the Daughter of Drakulon. This haunting cover instantly became a classic and one of the definitive images of the character, and the artist would return for covers on #4 and #6. The team at Dynamite knew we had to bring this masterpiece into the third dimension for collectors, and that’s what we did! Keep reading for a peek behind the curtain on how that’s done!

The first step is mocking up what we want to do to translate the image into a statue. Which is mostly just a Photoshop job of testing out different setups and tweaks. Artgerm’s cover is a (beautiful) closely cropped shot of Vampi, so we had to extend out the pose for her arms. The big question was what to do with the base. To match the haunting feel, we went for a stack of skulls, bloodied by her organic “costume” – an artistic idea that has become a major trend for the character with other artists like Nathan Szerdy and Eric Basaldua.

Now you can see the beginnings of the 3D sculpt. This is done using computer modeling software. Veteran sculptor Steve Kiwus has extensively worked with Dynamite across many statues and knocked it out of the park with this one too. At this stage, the most itntricate details are not the priority yet. The goal is to create a mockup capturing the general sculpt and colors for the whole team to review and approve.

The next step is getting into the nitty-gritty for the sculpt. Every single angle, making it a truly three dimensional build, and covering all the fine details like hair, the blood, and skulls base. Color is not the priority here during sculpting.

Now, off to production! Here’s an early shot of the samples for various variant editions. The version on the left did not end up being used. The other three, the standard edition, red skulls, and black and white version are all available on the Indiegogo campaign right now for a deal. Plus limited copies of another bust based on the art of industry legend Art Adams.

Here are final professional quality turnaround photos of the bust in all its glory. Fully sculpted, fully painted, and produced in a high-quality resin. Scroll up and compare to the original cover! It takes a whole team to bring Artgerm’s beauty into the third dimension!
The statue stands at 7.5 inches tall with a 2.75 inch wide base. That’s 19 and 7 centimeters, respectively. Only 300 units total were made for the two variants. Each bust comes with a numbered certificate of authenticity.

or via your regular comic book dealer!!