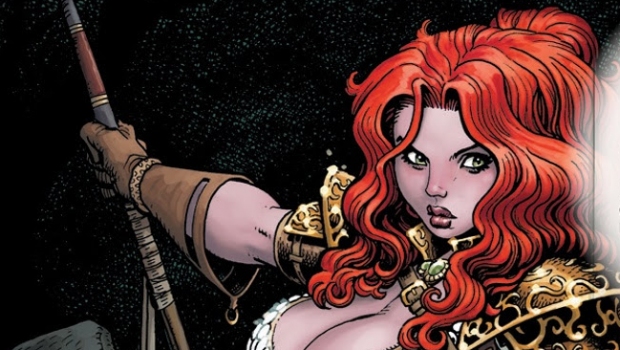 “Both of us love Red Sonja, so we were really excited to do these covers,” said Joyce Chin. “I read tons of Spider-Man comics when I was a kid, so the Spider-Man and Red Sonja was the very first time I saw Red Sonja. I’ve been lucky enough to draw her several times.

Arthur Adams added, “I’ve loved Red Sonja since I was, gosh, probably 13 years old or so. I used to buy Frank Thorne Red Sonja comics. His art was so fantastic”

These beautiful covers are completed with the coloring by Peter Steigerwald, known for his fan-favorite pairings with artists like Michael Turner, Joe Benitez, Ivan Reis, and many more. And they’re printed over special presentations of the recent smash hit Invincible Red Sonja #1 and the classic Marvel Feature: Red Sonja #2. Each cover is available separately, as a pair, and in three key variations and multiple combo packs. Trade dress, logo-free “virgin” and a black and white option round out the variants for each. Plus ultra-rare metal editions, and of course signed CGC graded copies!

Arthur Adams is by many considered to be one of the greatest comic artists of his era or any. His contributions to such hallmark titles as Uncanny X-Men, Fantastic Four, Hulk, and more were celebrated in fandom as a special occasion every time his name was in the credits box. Indendent work such as Monkeyman & O’Brien brought him to a whole new generation of fans. His style has been credited as influential to a wide range of popular artists including Todd McFarlane, Jim Lee, J. Scott Campbell, Ed McGuinness, Aaron Kuder, Nick Bradshaw, and many more. Adams has contributed to Dynamite’s Red Sonja library going all the way back to the debut issue in 2005. His memorable takes on the She-Devil have even lead to collectible statues.

Joyce Chin rose to prominence quickly in the 1990s, even among a crowded industry of many rising talents. First on Green Lantern, Superman, then Xena and more, her attention to detail and unique approach garnered countless fans. A huge breakout was the massive launch of the supernatural western title Wynonna Earp, which has now all these years later continued as a franchise and been adapted as a hit TV show. Dynamite has been lucky enough to work with Joyce on countless covers for titles like Lady Demon, Purgatori, Evil Ernie, and more, but she’s also drawn interior tales for both Red Sonja and Vampirella.