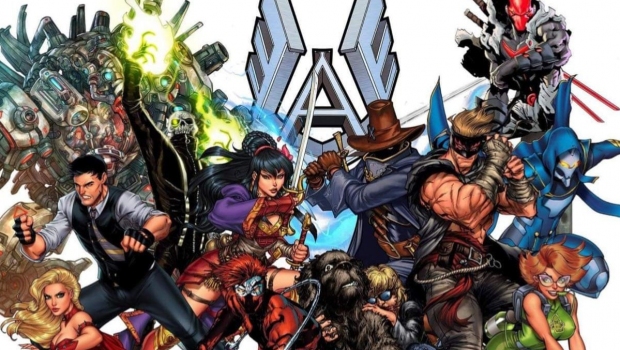 So a couple of comic book legends banded together, to create new creator-owned content in an anthology-setup. Yes, it is true! Publishing with help via Comics Elite and distribution via Lunar Distribution, the following folks, under ARTIST ELITE, are setting up 2 Primers (RED and BLUE) to be ordered these 2 weeks and lining up a new Anthology to be pre-ordered today, for June publishing.

Brett Booth and his long-awaited “The Lost Serpent Prince” will be making its debut in the pages of “Primer Red” from Artists Elite Comics!!

Alan Quah brings to the table his Mecha Girl!!

Ryan M Kincaid will be publishing Seraph and the Seven.

Paolo Pantalena will be releasing his title “Oniba: Swords of the Demon”

Ale Garza will be releasing “SandWenches”

Chad Hardin will be publishing his comic “Death Watch”

Freddie Williams II will be releasing his comic “Belong”

Jordan Gunderson will be releasing his comic “Apotheosis”

Dexter Soy will be releasing his comic “Red Ronin”

In a nutshell, these creators will publish what they can, when they can, but will not be hold to a strict schedule. So if they have 2 pages done, they will print 2 pages, and if more, then more, resulting in an Anthology.

Eventually the stories will be collected into their own titles and even prior material (Final Boss, for instance) will possibly also be reprinted.