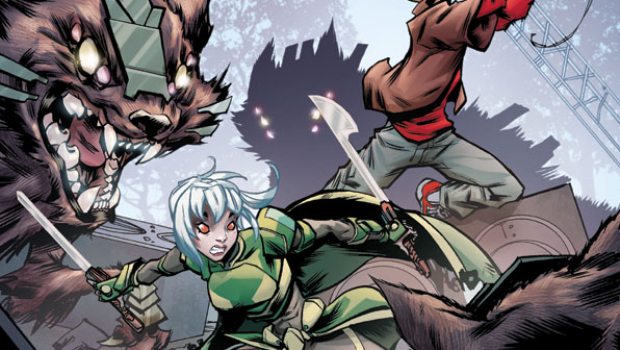 Aspen Comics has provided C4S with their April 2018 Solicitations.

While Ara shares her story with the young D’jinn she discovered lost in captivity, the mother she is searching for gets to know the other D’jinn trapped under Torinthal’s control, as they share their own tragic tales. The Fall of the D’jinn continues!

Hank and his friends search for clues within a private magic club, and discover that the art of seduction has its disadvantages that could lead to them never escaping. Meanwhile, Sudana and her allies come face-to-face with the Magic Harvester—with fatal results!

With the Earth literally falling apart, it’s up to Theo and his friends to try and save the day…again. Meanwhile, Perspecta has it’s own civil war taking place and a new power player has entered the picture which could spell certain doom for every living being there! And why is Dev trampling across the city like he’s Godzilla?!? Find out as the newest issue of Shrugged volume arrives!

Since the team rescued the group’s newest member, the cyber boy Asher, from the corporate megalomaniac, Drazic, their world has been in constant turmoil! Devyn and Molli find their bandit crew forced to do the bidding of an underworld gangster, Sir Penny, after borrowing and destroying his favorite ship, The Dark Lightning. Yet, even if they survive Sir Penny’s harrowing missions–how will they escape the clutches of a ruthless scoundrel plotting to kidnap Asher?!

Creator and writer Mark Roslan (Broken Pieces), joined by penciler Angel Tovar and colorist Erick Arciniega, bring you one of comics’ most bombastic sci-fi, action adventure series! Collecting together the entire volume 2 storyline and including a complete cover gallery, make sure to strap yourselves in because BUBBLEGUN Volume 2 is gonna take you on a wild ride!

The best-selling Aspen series from creator Siya Oum returns!
In the epic first volume, the tough-minded Lola learned the brutal reality of the apocalypse within the confines of the ruthless Wasteland Trading Company led by the treacherous Edgar and his posse! However, the true challenge still lies ahead, as her desire to be reunited with her lost parents continues to burn greater than ever!

Collecting together LOLA XOXO Volume 2 in its entirety, this amazing trade paperback includes a comprehensive cover gallery and a whole lot more. Don’t miss out on the series that welcomes all to enter the Wasteland!