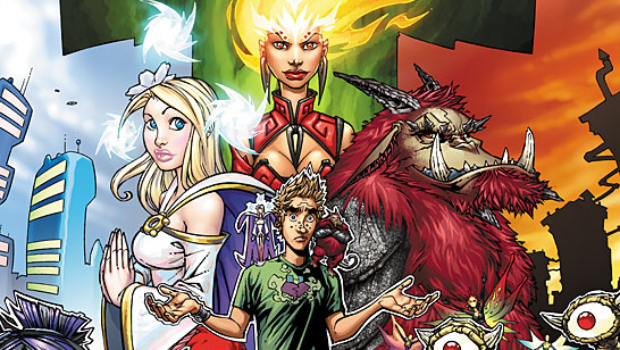 Aspen Comics is celebrating fifteen years of publishing in 2018, and is continuing its initiative of bringing back classic series from its library of titles with the release of Shrugged Volume Three in February. Created by Michael Turner and Frank Mastromauro, and written by Mastromauro with art by newcomers André Risso and Valentina Taddeo, Shrugged (Volume 3) #1 is in stores on February 28th. Mastromauro details the return of Shrugged as well as the long delay on Volume 2:

Creating Shrugged with Michael (Turner) is one of the most meaningful parts of my career. It wasn’t just another comic book series to us, but almost an extension of our lives. Many of the moments and story devices in the book are actually pulled from experiences we lived through. After Michael passed, I thought I had a good grasp on what the future of Shrugged should be. I started along that path with the beginning of volume two, but unfortunately, my daily work duties of running Aspen kept pushing Shrugged further down the road. Before I knew it, years had passed, fans had left, and I was still responsible for not completing a story that had meant so much to me. That had to change. I spent last year adjusting my work schedule to enable me to work on my comics again and bring Shrugged back to the world. I cannot express enough gratitude to the fans and readers who waited so long and continued to support the return of the series. I can thankfully say volume two is now fully complete with the brand new volume three coming out later this month. We have a brand new art team on the series and I’m thrilled to have Shrugged back (finally!) as part of our 15 year anniversary!

The full run of Shrugged (Volume 2) is currently available with the final issue #6 hitting comic store shelves last week, February 7th. For their 15-Year Anniversary, Aspen Comics is releasing a Shrugged Primer issue, a 25-cent introductory book that catches readers up on everything related to the property as well as a special tease at the upcoming third volume. The Shrugged Primer, the Shrugged Volume 2 TPB: New Thing to Fear, and Shrugged Volume 3 #1 are all in stores on February 28th. The solicitation copy for the brand new Shrugged Volume 2 TPB is as follows:

Aspen has provided the following item codes to order the Shrugged PRIMER, Shrugged Vol.3 #1, and both Shrugged Vol.1 and 2 TPBs with your local retailer.