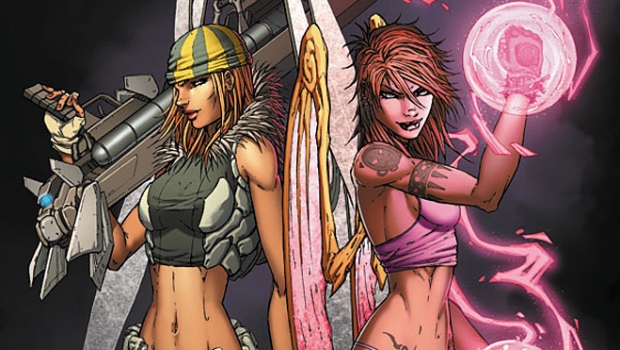 Aspen Comics has provided C4S with their December 2013 solicitations, to be pre-ordered via the Diamond OCT Previews.

PJ takes center stage in the arena, determined to be crowned king of the underground hi-tech battle royale. It¹s man-made machine vs. man-made machine and more! In the streets of Paris, Malikai and Sonia learn more about the growing movement known as Gabriel¹s Voice, and their strong belief in magic–despite ever seeing any firsthand-something Malikai could change with the snap of his finger. Also, as Grace and Vanyss enjoy a common bond, other magical people are being hunted down half a world away in San Francisco – but by whom and for what purpose?”

Aspen¹s own Vince Hernandez is joined by the artistic talents of Giuseppe Cafaro and Andrea Dotta to bring to you Aspen¹s newest hit series, TRISH OUT OF WATER!

It¹s an all-new direction for the Executive Assistant that started it all!

With the clocking ticking and a price on her head, Iris must fight her way through bounty hunters and assassins as she tries to rescue Cherry from kidnappers. Badly outnumbered and outgunned, Iris gets an assist from an unlikely source — a former Executive Assistant who was honor-bound not to interfere.

Aspen is proud to welcome writer Brian Buccellato and penciler Pasquale Qualano to the Iris family! Along with colorist John Starr, this incredible creative team is ready to bring you an ALL NEW EXECUTIVE ASSISTANT IRIS unlike anything you¹ve ever seen before!

The penultimate issue of Overtaken arrives! Will and Jesse are wounded, trapped and all alone on a strange new world. Their only goal is to find a way home, but an army of bloodthirsty aliens has other ideas for them. As the end draw near, what hope do they have for survival if no hope remains?

As Aspen and Chance begin to understand the true implications of Vana’s master plan, they realize that the whole world could be in danger, both above and below the seas. But, it may already be too late to reverse the damage! Meanwhile, in Muria, Anya’s desperate search for answers regarding her daughter’s disappearance lead her to a very surprising, and tragic, conclusion!

The epic finale to ³Blood Origin² reveals the true sacrifice required by Daffodil to forge the first Executive Assistant Academy! When the odds of success turn bleak‹and deadly–she must decide whether her choice to painstakingly continue on with her enterprise, or risk losing everything‹including her life!

Don¹t miss this pulse-pounding conclusion that is essential canon in the Executive Assistant Universe!