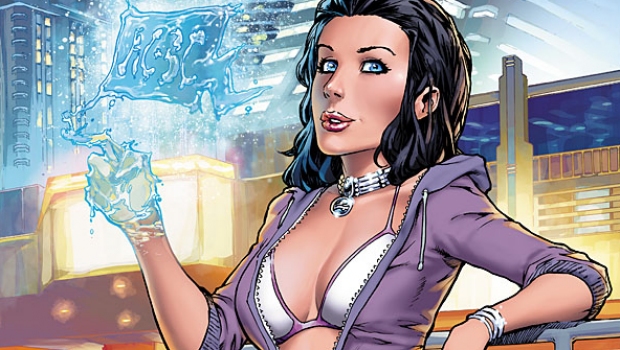 Aspen Comics will be hitting the East Coast from Thursday, May 14th to Sunday, May 17th to exhibit at the first annual Atlantic City Boardwalk Convention. The publisher will be located at Booth #925 on the show floor.

Aspen President Frank Mastromauro (Shrugged), co-owner Peter Steigerwald (The ZooHunters), artists V Ken Marion (Soulfire) and Jordan Gunderson (The Four Points), along with writers Tom Huchison (Big Dog Ink) and Heather Finley (Executive Assistant: Iris) will be representing the publisher. With them, they’ll have a full array of their diverse comic series and industry-leading prints available for purchase through the weekend.

The publisher will have an Atlantic City Boardwalk Con exclusive cover for The Four Points #2 by Gunderson, with colors by Valentina Pinto, a limited edition of 200. There will also be a full-size print of the variant cover available, alongside an exclusive print of The Four Points #2 Direct Edition Aspen Matthews cover by artist Khary Randolph (Charismagic).

Aspen Comics will be hosting a panel, The Official Aspen Comics Panel 2015, in Room 417 on Saturday from 1:00 PM to 2:00PM. Join the Aspen team of creators to catch sneak peaks of upcoming title releases and products, plus participate in a fan Q&A.

As well, Aspen will be co-hosting an Atlantic City Boardwalk Con after party with Level Up Entertainment at Mountain Bar on Friday, May 15th at 9PM. The evening celebration will feature live band karaoke, music by renowned chip tune artist DJ Cutman, classic video games, and an exclusive Drink and Draw with Aspen creators.