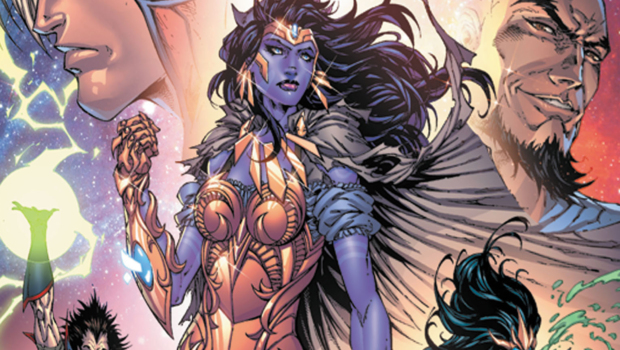 Aspen Comics is excited to announce the return of one of their best-selling titles this spring with the release of Jirni Volume 3 debuting this March 21st, and continuing their 15-Year Anniversary plans to bring back classic Aspen titles all year-long.

Fans of the critically acclaimed series created and written by J.T. Krul will also have several other Jirni-related items releasing in March to help catch them up to the upcoming series. Creator J.T. Krul discusses the return:

“I couldn’t be more excited about the reception Jirni has received and cannot wait for the release of the third volume. I’m lucky to have Michael Santamaria onboard this time around, as we delve deeper into the mythos of the D’jinn while Ara continues her quest to find her mother. Torinthal is back, and his master plan is starting to come together, which could be a game changer in this world and beyond. Everything so far has been leading up to this story.”

In combination with the Jirni Volume 3 release, Aspen is also debuting a special 25-cent Jirni Primer on March 21st that will serve as a supplemental jumping-on point for new readers and a refresher title for returning Jirni readers.

As well, Aspen is releasing the long-awaited Jirni Volume 2: “New Horizons” trade paperback on March 21st, to coincide with both Jirni #1 and the Jirni Primer. The item codes to order direct with comic book shops for all three Jirni items are listed below.