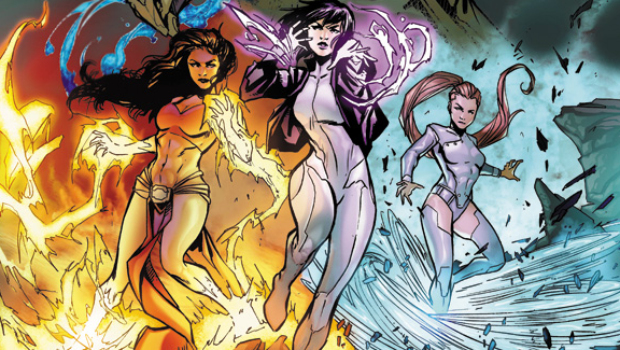 Aspen Comics has provided C4S with their November 2018 Solicitations.

The following titles will be available for purchase (TIP: Pre-Order!) in comic shops everywhere around the globe!

New readers and fans alike can find everything they need to know about Aspen’s popular series, NO WORLD, in this new 15 Year Anniversary Primer issue! Revisit the supernatural world of No World as a team of unlikely Aspen universe characters unite to take on a threat larger than any one realm on Earth…all for only a quarter!

These Aspen Anniversary edition primer issues are the perfect compliment to discover more about Aspen’s current slate of new and returning titles!

Aspen’s popular mash-up of supernatural characters returns for a thrilling second volume! The stakes remain high for Thicke and Doc Blue, as they attempt to navigate a landscape that continues to shift following the threat of Pardner Bob. Now, however, an even more unlikely union is in store for the No World cast, as a new team of powerful beings has entered the fray—and these ladies are experienced in the art of war!

Some time has passed since the tragedy of issue one, as Remi attempts to make sense of the clues her father left behind. However, even in a new village surrounded by new acquaintances, Remi discovers that the ruling Akolouth Clerics will stop at nothing to shroud all kingdoms in their brand of religious devotion. They also will stop at nothing to hunt her down and kill her!

As the battle rages on in Egypt between Malikai and Janus, another storm is brewing in Rainier’s new lair. Cassidy finds herself in the middle of events far bigger than she imagined, and she just wants to avoid becoming collateral damage from the chaos around her.

Delphi, Pirate and some new, powerful allies make their way to Alaska – the center of Delphi’s apocalyptic visions – as the Syndicate unleashes a long-dormant, destructive force that once plagued humanity for centuries!

Zihao is determined to free Cassi from her penthouse prison, but the obstacles in his way seem insurmountable. Lei has an entire media conglomerate at his disposal, and Jasper – well, he has Ajax! It looks like Zihao’s destiny may still lead into the big arena – For his greatest battle ever!

Don’t miss this exciting finale chapter of the first volume of Nu Way! Aspen is proud to partner with ZMX Entertainment on their landmark project created by J.T. Krul, Yuyan Song, and Dinna Wu, and featuring the stellar creative team of Alex Konat, Mark Roslan, John Starr, and Sal Cipriano.

Allies are in short supply for Aspen as she’s caught between the Russian Military and hostile warriors of The Blue, with both trying to end her once and for all! And even if Aspen manages to survive, she’s no closer to rescuing her brother from the hands of her enemies!

Characters from Aspen’s most critically-acclaimed titles unite—EXECUTIVE ASSISTANT IRIS, Soulfire’s MIYA, the supernatural vigilante DELLEC, along with an exciting new cast of characters come together in this altogether different story–yet one thing is certain—their respective lives are in no less danger! A mysterious conglomerate has emerged on the scene with a sinister purpose—the incorporation of pure evil on a scale never seen before! But, will this collection of unstable personalities come together as friends to defeat this new adversary—or will they instead battle as foes?!

This incredible new trade paperback collects together the entire first volume of NO WORLD along with a complete cover gallery and is the perfect addition for any new or returning Aspen Universe fan!