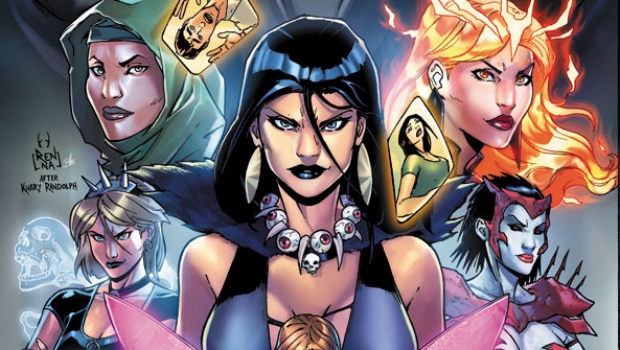 Aspen Comics has provided C4S with their October 2017 Solicitations.

The time for Revelations has ended.

The time for Decimation has begun…

Aspen Comics’ deadliest event EVER kicks off this October as the fiercest anti-heroines in the Aspen Universe take center stage in this massive event series! Orlana the Death Princess has a devastating ability to control minds, and she has recruited the most powerfully gifted villainesses across the globe to do her bidding—with no Aspen hero safe from her reach!

Lola and Monarch plan a daring rescue from the Suits by enlisting none other than the deranged cannibals! But, can she count on their true loyalty, or will their desperate plan backfire and end in their bloodshed!

Lives are lost. Worlds are destroyed. And everything changes—again?! Malikai, the Samusara and Bearer of the Light, has one final chance to set things right, but at what cost?

They are taking over…

From the innovative mind of acclaimed movie producer Gale Anne Hurd, and written by superstar writer and visionary Scott Lobdell, comes THE SCOURGE!

The skies of New York City are no longer safe. In mere hours, the greatest metropolis on the planet is turned into an island of horrors, as a virus rapidly advances throughout the city transforming its citizens into savage, bloodthirsty gargoyles!! Amidst the outbreak, one man, NYPD SWAT officer John Griffin finds himself as the last remaining hope to prevent the cataclysmic spread of the virus from the island, locating his estranged son within the chaos, and saving the city itself from complete annihilation!