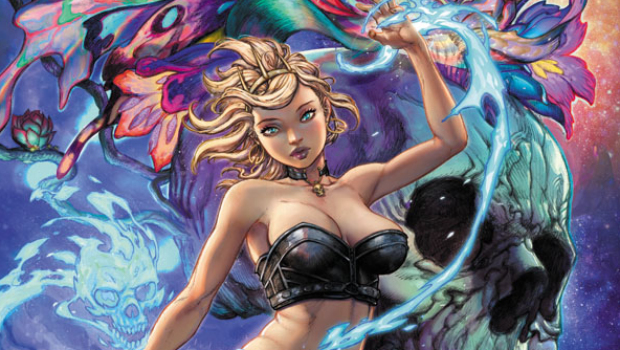 Aspen Comics has provided C4S with their September 2018 Solicitations.

Celebrate Aspen’s 15 Year Anniversary with 25-cent Primer issues!
New readers and fans alike can find everything they need to know about Aspen’s most daring series, DELLEC, in this new 15 Year Anniversary Primer issue! Revisit the supernatural world of Dellec and his quest to avenge the tragedies of his past…all for only a quarter! These Aspen Anniversary edition primer issues are the perfect compliment to discover more about Aspen’s current slate of new and returning titles!
The DELLEC PRIMER 2018 is in stores September 18th, 2018!

Aspen’s hardest hitting series, DELLEC returns for its long-awaited second volume!
Dellec’s previous battle against a higher power and the forces of evil led to a tragic ending—as he sacrificed his own life in a struggle with the Demi-God, Tera! But, a new underground resistance forged by Father Strayer is in the works, and with a shocking new leader to combat Terra and her minions, Dellec’s cause is ever growing. However, a new evil has emerged…one that could spell doom for not just the innocent—but every living soul!
From the minds of creators Frank Mastromauro (Shrugged, Awaken Skies) and Vince Hernandez (Michael Turner’s Fathom: Kiani, Charismagic), along with art by Andre Risso, Michael Ste Maria and John Starr, this newest volume of DELLEC is gonna redefine your definition of the human spirit!

Cassidy wants nothing more than to live a normal life, but there’s nothing normal about having magical abilities. Like it or not, she’s special and that puts a target on her back. Meanwhile, Malikai and Grace try to find Janus, the man who attacked Ren. While in the Everlands, Sarin looks to Onyx for answers about a means to a power greater than his own!

A new player enters the field to challenge the syndicate of fallen angel’s plans for world domination. Delphi and Pirate must now tackle their mission alone as every facet of their relationship is tested!

On the run, Zihao and Harper try to hide in the shadows as they plot their next move forward. Zihao thinks the hard part is over and that he can chart a new path, but his past life isn’t done with him yet. Not by a long shot. Jasper dedicated a lot of resources to Zihao’s development, and he aims to see a return on his investment, one way or another!
Don’t miss this exciting new chapter of an electrifying story in a bold new world! Aspen is proud to partner with ZMX Entertainment on their landmark project created by J.T. Krul, Yuyan Song, and Dinna Wu, and featuring the stellar creative team of Alex Konat, Mark Roslan, John Starr, and Sal Cipriano.

It’s Aspen Matthews versus her former mentor and dissident Killian in the showdown that’s been years in the making! And no member of The Blue may survive!

Iris and Mack launch an all-out assault on Magni Global Headquarters—a building more fortified than the Pentagon. They’ll face guards, assassins, and security powerful enough to kill a superhuman … and not everyone will survive!

Dellec is really an everyday man caught up in a blur of immorality, yet his quest is always clear – destroy the forces of evil where they flourish – and even places where the lines of good and evil are not easily defined. Following a tragic set of circumstances leading to his wife’s murder at the hands of a malevolent Demi-God named Tera, our hero lands headfirst into the battle between good and evil – and his chances for survival are grim. However, Dellec is not one to back down from a fight no matter the foe – specifically when his own life hangs in the balance. This is the tale of one man’s quest for vengeance and redemption as he attempts to take on the very being that created mankind itself – God!

Written and created by Frank Mastromauro (Shrugged, Dellec) and Vince Hernandez (Charismagic, Damsels in Excess), and featuring artwork by Micah Gunnell (Shrugged, Deadpool Team-Up) and Peter Steigerwald (Soulfire, Kick-Ass), this incredible new trade paperback collects together all six original issues of DELLEC along with the zero issue, Beginnings story and a whole lot more. Don’t miss out on this riveting first volume of DELLEC’s epic story.

One of the most powerful figures in the Fathom universe returns for this epic third chapter!

Following the tragic events of The Elite Saga and the shattering of her family ties, Kiani has risen above the surface and seemingly disappeared amongst the large expanse of the human population. However, with a power inside her that is capable of changing-or destroying–the world’s landscape, her presence can only remain hidden for so long!