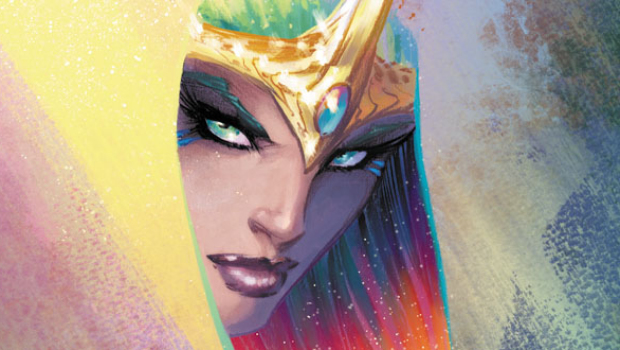 Aspen Comics is continuing their 15-Year Anniversary campaign on releasing classic “legacy” titles with the return of their best-selling Michael Turner’s Soulfire on July 18th. In 2018, the property is celebrating its fifteen-year anniversary since its critically popular debut in 2003, and subsequently became the #1 best-selling independent title the following year. Created by Michael Turner, the flagship action-adventure returns for its epic seventh volume with veteran Aspen writer, J.T. Krul (Fathom, Jirni) with art by rising star newcomer Chahine Ladjouze, colors by Wes Hartman (Portal Bound, Santeria: The Goddess Kiss) and lettering by Zen (Fathom, Charismagic).

It has been an honor to be part of Soulfire going all the way back to its first volume. This book holds a special place in my heart. In a way, it has always been like a second home for me, and I can’t wait for readers to see what we have in store for this anniversary volume. Incredible adventure, new dangers, and plenty of magic. This volume really sets the stage for the future of SOULFIRE in a big way, and I couldn’t be more excited.

To support the release of this Aspen “Legacy” Anniversary volume, Aspen is bringing in top tier cover artists including direct edition covers for each issue by Art Adams, Mirka Andolfo, Mike Choi, Michael Turner and more to be revealed.

Similar to previous Aspen releases in 2018, the publisher is releasing a Michael Turner’s Soulfire Primer issue for only 25 cents on July 18th, in addition to the Michael Turner’s Soulfire Volume 6: Future Shock trade paperback also on the release date in conjunction with its fifteen year anniversary celebration. The publisher has provided item codes for these titles below to help fans order copies with their local retailer: