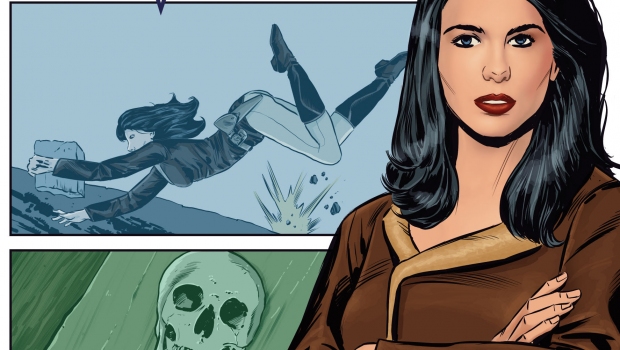 After launching with a Kickstarter campaign, Athena Voltaire and the Sorcerer Pope—the first in the ongoing collection of mini-series-—will hit comic shops in fall 2017. The Kickstarter launched today and will run until May 5th, 2017, with a goal of $5,000.

“When Action Lab approached me about doing Athena Voltaire as a monthly ongoing, I was thrilled,” Bryant said. “I have a huge over-arching storyline that I started building back when I wrote new material for the Athena Voltaire Compendium. Knowing that we have a brilliant artist like Ismael Canales on board makes it easier for me to relinquish some of the drawing duties.”

Bryant will write the series and provide covers. Additionally, he’ll be sharing art duties with Ismael Canales, who provides visuals for the first mini-series. “The idea is for me to draw some of the miniseries,” Bryant said. “But I’ve gotten slower, so it makes sense to bring another artist on board to make sure we can get the book out on a regular schedule without compromising the quality of the art.”

The series has garnered its fair share of support among comic professionals, as well.

“Athena Voltaire is just my kind of glorious pulp epic. A comic lover’s comic book if there ever was one, full of everything that makes comic books worth loving.” — Matt Fraction

“Imagine if the likes of THE MUMMY and VAN HELSING were actually, you know, good.” —Warren Ellis

“Athena Voltaire is a wonderful pulp throwback. A return to the heady days of the adventure comic. Swords, guns, airplanes, sand, jungles, dens of villainy, conspirators, cutthroats, treasure, and the most dangerous woman in the genre.” —Tim Bradstreet

“Bryant resurrects the classic era of high adventure in Athena Voltaire. With stylish storytelling and gorgeous rendering, he makes a genre that has in recent years been relegated to the back shelves of entertainment fun and compelling again. I can’t wait to see what Steve and Athena have in store for us.”
— Mark Schultz