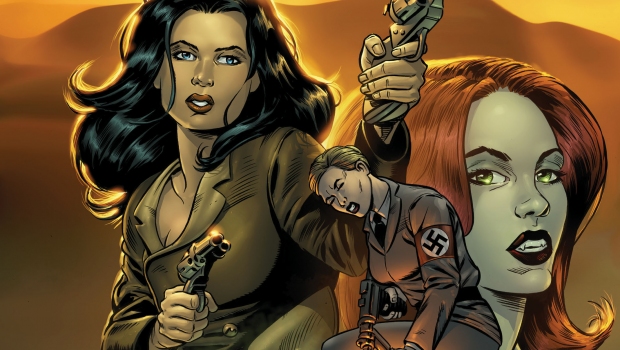 “I’m proud to add Athena Voltaire to such a diverse line of quality books,” said writer/artist Steve Bryant, whose all-ages series Ghoul Scouts debuts at Action Lab in June. “I’ve known the Action Lab folks for years, and after working with them on Ghoul Scouts, I knew they were the perfect publisher for Athena Voltaire.”

“I’m ecstatic for Steve to join the Action Lab family, and I can’t think of a better home for Athena than Action Lab. We have a proud history of publishing strong female characters, and Athena Voltaire is sure to stand shoulder to shoulder with Princeless, Aero-Girl, Nutmeg and Fight Like a Girl,” said ALE President Dave Dwonch.

A re-release of the hardcover Athena Voltaire Compendium will mark the heroine’s Action Lab debut, followed by Athena Voltaire and the Volcano Goddess, an all-new 3-issue mini-series.

Additional planned releases include a one-shot special and a prose collection.