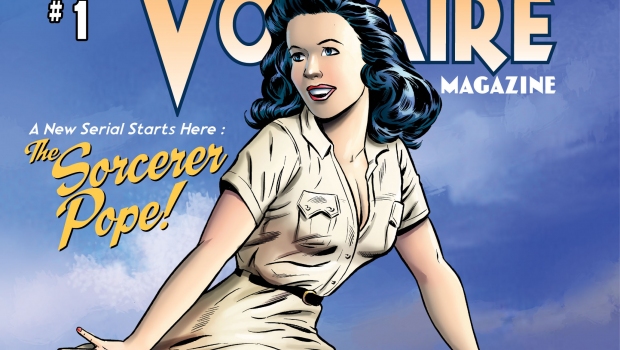 The Kickstarter for the new ongoing Athena Voltaire ends less than a week from now on May 5th. The series features the new adventures of pulp heroine Athena Voltaire as she travels the world in the 1930s, fighting against Nazis, the occult and more! 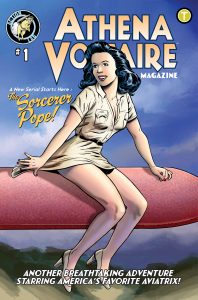 The Kickstarter hit its $5,000 goal and has reached several stretch goals for trading cards and mystery prints. If the Kickstarter reaches 200 supporters, all backers will get an exclusive digital comic: the Retro Edition of Athena Voltaire and the Isle of the Dead. It has been digitally “aged” to create a throwback experience. New rewards have also been unveiled in the Kickstarter’s final week:

Steve Bryant, the Eisner, Manning, and Harvey Award-nominated writer/artist of Athena Voltaire, commented about the immense support the Athena Voltaire Kickstarter has received: “I’m thrilled with the response the campaign has gotten.”
Bryant continued, “It’s both a great time and a tough time in the direct market right now—there are so many excellent books! And that makes it hard for retailers to be able to accurately be able to anticipate what will sell and what won’t. Supporting the campaign buys us the time to have a continuous presence, which allows for word of mouth to build for both retailers and readers.”
“Best of all, the more we exceed our goal, the more cool Stretch Goals we can offer: prints from creators I admire, trading cards for the Athena Voltaire universe…stuff like that! That’s my favorite part of a campaign—coming up with stuff that I’d like to get in the mail!” Bryant concluded.

Athena Voltaire and the Sorcerer Pope—the first in the ongoing collection of mini-series-—will hit comic shops in fall 2017.