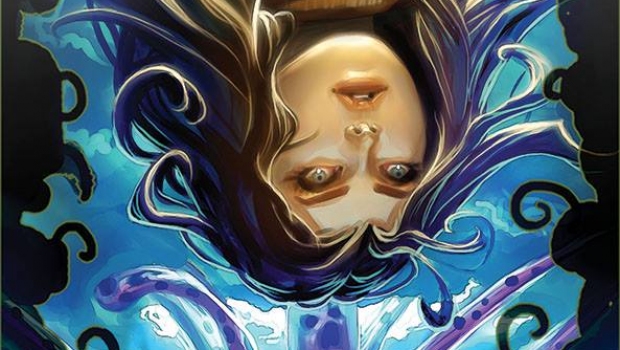 Azure be released through the convention circuit and online.

Azure is about the physical weight of depression. How the flickering, golden moments of a day can make you feel like you’re flying, and how the darkness can manifest into a nightmarish monster.

As Pat Shand says: “Azure was conceived by Nei, who was inspired by dreams, music, and her life. We’d wanted to work on something together — something different, something new, something that she wrote was a “story beyond a story” — and this was the result. I listened to a lot of Rilo Kiley while we worked on this. I was dealing with the devastation that was settling in after ending my engagement. I was watching Nei live stream her art a lot, and finding inspiration in her process. I wanted to sort of take down (or at least look through) the veil of where writer/artist separate, especially in my work which was then and is now mostly work-for-hire rather than creator-owned. ”

But besides all that, at its most basic, Azure is about a girl flying through the clouds and coming home.