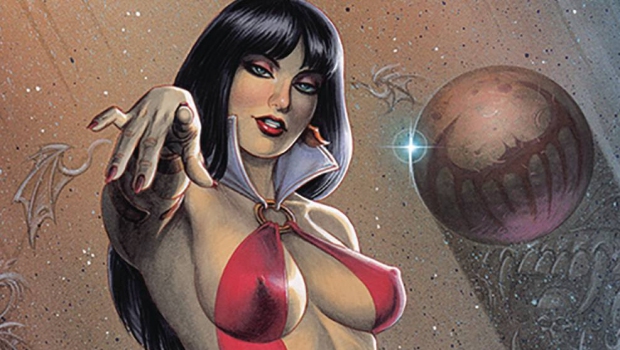 Just launched, the campaign is live this moment! Click Here!

When the new Vampirella comic series broke sales records, with a final print run of over 150,000 within and outside of the direct market, Joe offered to contribute his own cover to the launch with the intention that he could introduce his amazing fans to an all-new Vampirella being written by the legendary Christopher Priest. Linsner will always be associated with the best of Vampirella, first contributing to the character professionally over 20 years ago and being a fan long before that. His continued contribution to her library of stories and art helps cement her as one of the most enduring characters in comics today.

The cover is available in multiple editions. These include the standard version in full glorious color and with Vampi’s iconic title logo – fun fact: the modern iteration of the logo goes way back to 1971’s Vampirella #12! Collectors can also get a version without the logo, a black and white pencil sketch with or without logo, any combination and any of them signed by Joe himself.

Linsner shared, “This cover helps celebrate Vampirella’s 50th year in print, and my 30th year of drawing Dawn. Let this pave the way for my next 30 years — the best is yet to come.”

For the Linsner superfans, he will even be doing a limited number (only 30!) of one-of-a-kind remark sketches on the black and white covers.

The cherry on top is the opportunity to bundle in or separately get the two Vampirella graphic novels that Linsner has previously illustrated, Dawn/Vampirella and Roses for the Dead. The former series is a historical first for Joe’s 30-year old influential indie creation. Vampirella superfan and Joe’s partner in crime Kristina Deak-Linsner contributed writing to both series and took the lead on Roses, bringing back supporting character Evily. Fans looking for the optimal package should look no further than the special printed folio case that will include both graphic novels and all variations on the cover.