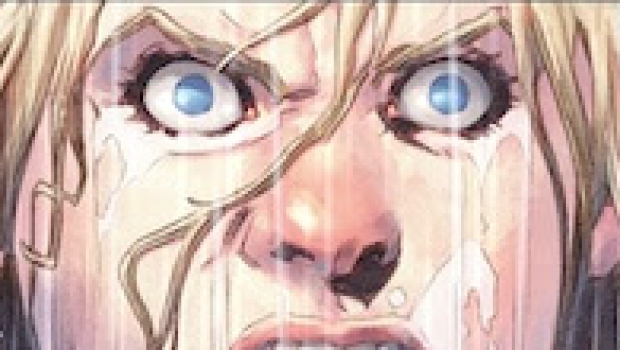 BAD IDEA is over, but yesterday you pre-ordered the Final Five anyway.

Today, all will be revealed.

Stay tuned on Twitter and Instagram for the next, and final, batch of rebellious new releases from BAD IDEA.

Five mind-melting, longbox-busting titles of pure comic book brilliance by, what is without a doubt, the greatest collection of writers and artists ever convened will be revealed today.

Congrats on being all in.

*** MONSTER KILL SQUAD #1 ***
Written by CHRISTOS GAGE
Art by TOMAS GIORELLO
Colors by DIEGO RODRIGUEZ
Cover by TOMAS GIORELLO and LEWIS LAROSA with DIEGO RODRIGUEZ
PLUS: An All-New BAD IDEA B-SIDE
FOUR ISSUES | MONTHLY
$6.99 EACH  |  32 PGS.  |  NO ADS  |  BEGINNING SEPTEMBER 1, 2021
Once upon a time, monster attacks were rare. A forest witch might murder a few hikers, a killer clown might eat a few children, or a malevolent ghost might drive a young couple insane just for the hell of it. But these events were scarce, easily covered up, and soon faded into campfire stories good for a laugh.

A woman awakens on an alien planet with no memory of her previous existence. She begins a quest to survive, relying on her wits, skills, and instincts to adapt to an inhospitable environment. After months barely surviving, she discovers a mysterious spacecraft at the bottom of a frozen lake. She dredges it, only to discover a blurred holographic image and distorted messages. She repairs the craft and journeys across the galaxy — but what is the ship’s destination, and who are the messages from?

Then, Mark Russell (Flintstones) joins forces with virtuoso artist Adam Pollina (Whalesville) for a tale of friendship and adventure in the far future.

Cyrus Garvey couldn’t believe his luck: If he agreed to attend a timeshare presentation, he’d get a free transporter trip anywhere in the galaxy. And those things are expensive! Cy sat through the hour-long presentation at Last Resorts Inc, passed on the timeshare, but took the vacation, and man was it a blast. A few days later, Cy’s friend gets the same invitation, but she’s reluctant to go — she can’t say no to a salesman. Cy agrees to sit through the presentation under her name, and she’s cool, as long as they can take a trip together.

Cy shows up to the presentation, takes a seat in the back and prepares to run out the clock on the hour, but is surprised to find a familiar face giving the sales presentation is…himself?!

Surely Last Resorts Inc., didn’t take Cy’s DNA from the transporter and clone him? Surely they didn’t build a bunch of clones as slave labor…and surely Cy didn’t agree to this in the fine print. Man, all Cy wanted was to get away for a few days…

*** PYRATE QUEEN #1 ***
Written by PETER MILLIGAN
Art by ADAM POLLINA
Colors by TAMRA BONVILLAIN
Cover by ADAM POLLINA with TAMRA BONVILLAIN
PLUS: An All-New BAD IDEA B-SIDE
FOUR ISSUES | MONTHLY
$7.99 EACH  |  32 PGS.  |  NO ADS  |  BEGINNING SEPTEMBER 1, 2021
This September, embark on a tale of love, loss, life, death and bloody revenge! Meet Monday Ryan, a pyrate with a bad reputation and a price on her head. To be a pyrate is to live a short and merry life and to live it free. It ends for most with a length of rope and a four-foot drop.

*** HERO TRADE: PASSIVE / AGGRESSIVE ***
Written by MATT KINDT
Art & Cover by DAVID LAPHAM
PLUS: An All-New BAD IDEA B-SIDE
A DOUBLE-DEALING, DOUBLE-BARRELED ONE-SHOT
IN GLORIOUS BLACK AND WHITE
$7.99  |  32 PGS.  |  NO ADS  |  ON SALE AUGUST 4, 2021
Midnight in Los Angeles, and the brutal vigilante known as The Watch metes out justice, cleaning the street of lawbreaking scum. As fist meets face, The Watch’s phone rings: it’s Fred from Capitol A-1 Bank. The Watch has been hacked — actually, it’s his civilian identity — but Fred sure as shit doesn’t know who he’s talking to — he’s just calling the high-end clients to let them know their bank account’s been drained.

The Watch is headed to Russia — with $8.8 billion reasons to kill every last member of the Russian hacking farm —and justice will be measured in broken bones and gallons of blood.

New York Times best-selling writer Matt Kindt (Mind MGMT) and legendary illustrator David Lapham (Stray Bullets) give bone-shredding vengeance a name this August as another piece is placed on the HERO TRADE board in a tale guaranteed to shock and provoke.

*** ODINN’S EYE #1 ***
Written by JOSHUA DYSART
Art by TOMAS GIORELLO
Colors by DIEGO RODRIGUEZ
Cover by TOMAS GIORELLO with DIEGO RODRIGUEZ
PLUS: An All-New BAD IDEA B-SIDE
FIVE ISSUES | WEEKLY!
$7.99 EACH ($9.99 ISSUE ONE) |  32 PGS. (72 PG ISSUE ONE)  | NO ADS
BEGINNING DECEMBER 1, 2021
Solveig, a young farm girl of great promise, is haunted by visions from the god-king Odinn himself. In words she cannot understand, and images too violent for a child to comprehend, Odinn tasks Solveig with a brutal mission: retrieve his eye — the one he famously traded for wisdom — and bring it to him.

In the real world, the winter season has not left the land of Solveig’s people for several years. As crops fail and livestock perish, fear and panic grow. In their desperation to appease the gods and free the land of this never-ending winter, the tribe turns to the child whose visions are surely a sign from Odinn. A war party is assembled. Solveig and a band of warriors — including an all-seeing witch — are sent north on a great quest — one which will change all that she knows, all who she has known, and all that she will become.

An epic of incredible scope and vision from the minds of Joshua Dysart and Tomas Giorello. Told weekly in 5 parts this December.

A complete list of Bad Idea Destination Stores can be found right here and you can pre-order every Bad Idea title by simply clicking here and filling out the little form.

For more information, visit Bad Idea online at BadIdeaCorp.com, Facebook, Twitter, and Instagram, or just mash the screen with your palm and do all four simultaneously.