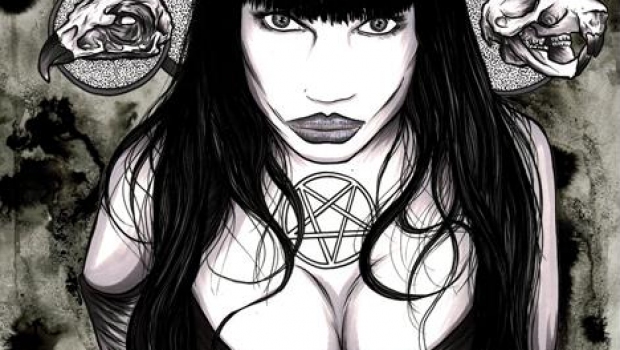 Canada’s capital has become a growing center for comic book production, and Ottawa’s own Kristopher Waddell will be celebrating the release of his new graphic novel ‘BIG BOX APOCALYPSE’ through the world’s largest distributor of comics and pop culture, DIAMOND COMICS DISTRIBUTORS this December 2014. This is a massive distribution success for the Ottawa born creator.

BIG BOX APOCALYPSE ia about a supernatural Big Box Store which corrupts a small town to open a gate to Hell! Teddy St. Louis, owner of ‘The Black Cat Emporium,’ battles ‘Star Mart’ owner, Mona, a demon of avarice and greed. The end is nigh. The Big Box Apocalypse approaches!

“I got my start with a pitch to IMAGE SHADOWLINE as part of their ‘who wants to create a super heroine’ contest. It was a great learning experience to chat and develop a book with IMAGE COMICS legend, Jim Valentino. Working with Jim and Editor Kristen Simon gave me the drive to continue pursue comic book writing. I’ve wanted to announce this for a long time, and now it’s finally official… my Graphic Novel ‘Big Box Apocalypse’ will be distributed by DIAMOND COMICS DISTRIBUTORS out of the USA for North American distribution. It’s been a joy, that after only a few short years of creating comics, I’ve reached the goal of major distribution with my graphic novel ‘Big Box Apocalypse’. This achievement will also help Ottawa’s Comic Publisher Mirror Comics gain some much needed exposure on the international scene. I couldn’t be happier. OCT14 1548 is the order code in this month’s edition of PREVIEWS Magazine.”

MIRROR COMICS is a Canadian independent publisher of comics, graphic novels and trade paperbacks, working with creators from all over the world. President and publisher Dominic Bercier has worked for IMAGE, Dark Horse, Top Cow, Dreamworks Animation and more before co-founding MIRROR COMICS with Allan Isfan in 2010.. Editor-in-Chief and co-publisher, Kristopher Waddell, has a background in film and television, and has written BIG BOX APOCALYPSE, MIRROR COMICS’ first book to land on DIAMOND COMCS DISTRIBUTORS. MIRROR COMICS now has distribution with DIAMOND and ComiXology.com and MyDigitalComics.com. They also have a StorEnvy.com Store where all of their current titles are now available in print. DIAMOND opens MIRROR up to thousands of shops across North America. For more information please visit www.mirrorcomics.com, follow @mirrorcomics on Twitter, and give /MirrorComics a like on Facebook.

MIRROR COMICS is an indie comic book publisher from Ottawa, Canada, working with creators from all over the world. They are comic book creators who are taking initiative and using the available networking mediums and technology to get their work discovered. For more information please visit www.mirrorcomics.com.