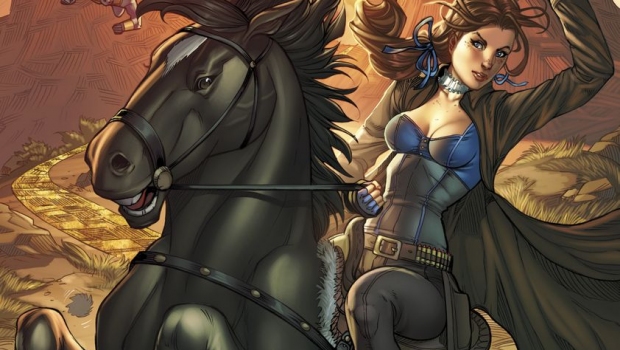 A twister from over the rainbow, a fateful accident and an epic journey along a road made of yellow bricks.  You know the story.  Or do you?  Next month, Wizard World Chicago Comic Con and comic book publisher Big Dog Ink are inviting fans to re-discover an Oz you never knew existed with a very special re-issue of the wild west adventure that has taken the comic book world by storm.

At next month’s Wizard World Chicago Comic Con (August 8-11, Rosemont Convention Center in Rosemont, IL) each of the first 50k fans in attendance will receive a special Wizard World Chicago Limited Edition copy of Legend of Oz: The Wicked West #1, with a special cover by popular artist Nei Ruffino, absolutely free with their registration.  Wizard World has received fantastic feedback for providing fans of the Walking Dead with special exclusive re-issues of that hit comic series, and Legend of Oz: The Wicked West is the latest addition to their popular promotion.

Wizard World Chicago Comic Con attendees will be invited to explore the very first issue that started it all as they step back over the rainbow to an Oz filled with wild west gunslingers and magical creatures, where the law has been replaced by a green skinned, rifle toting witch and tough as nails cowgirl Dorothy ‘Gale” who must save the land of Oz with with nothing but her wits, ruby bullets and her trusty steed, Toto.

The full event schedule can be found at www.wizardworld.com.