Big Dog Ink and Knightingail comic creator/writer/producer Wayne Gardiner are overjoyed to announce that the Knightingail saga will be returning to Big Dog Ink this Summer! The all-ages, fantasy-adventure comic book Knightingail: Shadow Divisions will be available in comic book stores nationwide beginning July 2013 and will continue as a 6-issue monthly mini-series.

Suitable for fans young and old, Knightingail: Shadow Divisions continues to follow the adventures of Knightingail where the first mini-series volume, Knightingail: The Legend Begins, left off. In this breathtaking new series, Knightingail and her four Centurion companions must somehow find a way to unite and use their combined powers to destroy Luceus and a band of assassin warriors known as the Showdow Ravens.

Knightingail: Shadow Divisions will also feature amazing cover artwork. Keeping with Big Dog Ink tradition, two covers will be released nationally in stores. The Cover “A” artwork will be provided by interior artists Mel Joy San Juan and Katrina Mae Hao. Cover “B” artwork will be illustrated by the amazing team of Nathan Seals and Kate Finnegan who provide a unique Disney-

Manga like full-painted art style.  A talented line-up of artists will also be contributing cover art to the series including Dawn McTeigue, Jen Broomall, Mike DeBalfo, and Nei Ruffino with colors being provided by Ula Mos and Nei Ruffino.

If you enjoyed Knightingail: The Legend Begins, creator Wayne Gardiner promises an even more thrilling and dynamic story in Shadow Divisions. Knightingail: Shadow Division fiercely launches into the challenges, perils, and anguish that result from war. Shadow Divisions features larger, epic battles only hinted at in the first volume while retaining the emotionally charged and sometimes hilarious dialogue that passes between Knightingail and her friends. Great for new readers and longtime fans of Knightingail, Wayne Gardiner weaves a narration monologue by Knightingail throughout the first issue introducing new and continuing readers to everything they need to know to appreciate this exciting new series. 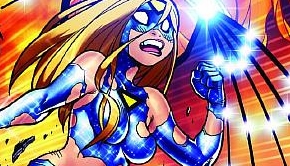